Roger Goodell and the NFL has tried to avoid the problem of domestic violence to mitigate harm to the league and its image. Yet domestic violence is not something we can get away from but must engage. Perhaps Brandon Marshall, a once unlikely candidate, can show the league how.

In a Week 2 matchup with San Francisco, wide receiver Brandon Marshall scored three of the Bears’ four touchdowns in Chicago’s 28-20 win over the 49ers.

That standout performance, along with dozens of others by the five-time Pro Bowler over the past six seasons, would never have happened had the NFL’s new Domestic Abuse Policy been in place in 2008, because Brandon Marshall would have been kicked out of the sport. Oddly enough, though, given the maelstrom surrounding owners and executives over their mishandling of violent offenders in the league’s midst, banishing Marshall for his transgressions would likely have been a bad thing.

Domestic violence is nothing new to the NFL, with 56 reported incidents implicating 50 players on 25 different teams since Roger Goodell became the league’s commissioner in September 2006. Four of those cases involved Marshall. Under the new policy ‒ announced by Goodell less than a month ago ‒ three such offenses would have prompted the league to expel Marshall forever. Improbably, instead of being six years into a lifetime ban and made an example of, Marshall may now represent the NFL’s best hope for altering its culture, shepherding behavior change, and rehabilitating the league and its tarnished public image.

By many accounts (including his own), Marshall was a bad guy, no different than Ray Rice, Jonathan Dwyer, Greg Hardy and Ray McDonald are now. Between January 1, 2007 and April 23, 2011, Marshall was connected to the following incidents:

Last week, Gloria Allred accused the NFL of “covering up” Marshall’s 2008 actions. The NFL did suspend Marshall for one game in August that year after repeated violations of the league’s Personal Conduct Policy, a markedly more lenient document at that time. Under the new rules, Marshall would have been suspended for the first six games of the 2007 season, banned for a year after the March 2008 incident, and given a lifetime ban in 2009. Instead, Marshall was given a second chance after being sentenced to anger management counseling for his transgressions.

What happened next is remarkable. More than that, though: It’s important.

During counseling, Marshall discovered he had never learned productive ways to deal with his anger. “I come from an environment where it wasn’t the family that prayed together, stayed together. It was the family that fought against each other stayed together. I saw women as the aggressors. I saw men as the aggressors. And I think the first half of my career really painted a picture of me being a product of my environment,” Marshall told Inside the NFL co-hosts Boomer Esiason and Greg Gumbel. Recalling the frequent occurrences of his upbringing, Marshall cited, “cops being called. Families fighting amongst each other. Arguing. Yelling. … But at the end of the day, you’ve got to look in the mirror and say, ‘How can I change this? How can I be better than the last generation?’”

When asked by Esiason how he would have been treated under the new Domestic Abuse Policy, Marshall responded introspectively. “I was in a situation back then where I didn’t see the fault in [myself],” he said, “So it could have been one of those things that scared me and maybe helped me get out of that situation. But at the same time, the way my mentality was back then, I probably would have stayed [in the situation] and probably served a six-game suspension or even been banned from the NFL.”

On July 31, 2011 ‒ three months after becoming a victim of domestic violence himself when stabbed by his wife ‒ Marshall publicly admitted his life-long struggle with Borderline Personality Disorder, a condition that often manifests as unusually heightened sensitivity to and fear ‒ sometimes aggressive fear ‒ of being viewed negatively, difficulty managing relationships with others, emotional instability and impulsivity. He committed himself to therapy, both medicinal and counseling, and is now an outspoken advocate for BPD awareness and fundraising.

During the Miami Dolphins bullying scandal in 2013, Marshall was among the many NFL veterans to condemn physical and mental harassment in the locker room, saying:

“You can’t show that you’re hurt. You can’t show any pain. So for a guy that comes in the locker room and he shows a little vulnerability, that’s a problem. So that’s what I mean by the culture of the NFL, and that’s what we have to change.

Take a little boy and a little girl. The little boy falls down, and the first thing we say as parents: ‘Get up, shake it off. You’ll be OK, don’t cry.’ When the girl falls down, what do we say? ‘It’s gonna be OK.’ We validate their feelings. So right there from that moment, we’re teaching our men to mask their feelings, don’t show their emotions. And it’s that times 100 with football players. So what’s going on in Miami, it goes on in every locker room.

But it’s time for us to start talking, maybe have some group sessions where guys sit down and talk about what’s going on off the field or what’s going on in the building and not mask everything because the [longer] it goes untreated, the worse it gets.”

Brandon Marshall, a man who admits he grew up “fighting” and emulating “aggressors,” is now suggesting that NFL players talk it out. To talk about their responsibility to one another, to their families, to themselves, and to be “better than the last generation.” To change their behavior and their attitudes toward the way things have been done in the past. To stop conditioning boys to “be boys.” To stop hitting and start talking.

Domestic violence is not just an NFL problem. According to the 2010 Centers for Disease Control National Intimate Partner and Sexual Violence Survey, “about 1 in 4 women (24.3%) and 1 in 7 men (13.8%) have experienced severe physical violence by an intimate partner (e.g., hit with a fist or something hard, beaten, slammed against something) at some point in their lifetime.” Half of men and two-thirds of women reported the abuse took place before age 25. As America’s most popular television show, the NFL is often a vehicle for conveying important issues prevalent in society. NFL players are the most visible perpetrators but this problem is pervasive and widespread. Domestic violence – not football – is America’s real national pastime.

Growing up, Marshall learned how to lose his temper, how to fight, how to hide any emotional vulnerabilities: how to “be a man.” Like fellow NFL players Adrian Peterson (currently under investigation for reckless and negligent injury to a child) and Greg Hardy (currently appealing a conviction for domestic violence), he had money and resources that most people do not. Indeed, he was only given so many opportunities because he is a fabulously talented professional athlete. This privileged status is why Marshall has the opportunity to help lead the NFL into a national conversation about how to deal with domestic violence in America.

It starts in childhood, where Marshall accurately notes boys are taught “how to be men” by denying physical pain. For some, those lessons continue with corporal punishment, fighting, and physical altercations. Some, raised in an environment of abuse, pass these values to their children, either directly through the use of a “switch” or through observation, when verbal and physical abuse exists “in the family”. This becomes a cycle of parents hitting each other or their children, with their offspring in turn emulating the behavior they see and becoming abusers themselves. On and on it goes, hidden from society because shame goes hand-in-hand with abuse.

Domestic violence will never entirely disappear but the NFL’s current crisis has dragged it out of the shadows and into the spotlight provided by Sunday, Monday and Thursday nights. Victims have been empowered to speak up, as evidenced by the #whyIstayed / #whyIleft social media movement. States are enacting new laws, such as the Massachusetts Domestic Violence Act, to more effectively address such abuse through the criminal justice system. The NFL has announced their intent to financially support charitable organizations like the National Domestic Violence Hotline and the National Sexual Violence Resource Center. While the NFL’s motives here are obviously selfish ‒ team owners and league executives want this current crisis to leave the headlines ‒ those organizations will now be able to help thousands of victims in ways that were not possible before the NFL needed to assuage its guilty conscience.

Now, the NFL needs an outspoken advocate: someone who has abused and been abused. Someone who can articulate the need to talk about problems instead of using physical violence, gender-driven insults or verbal attacks. Someone who understands that change begins with taking personal responsibility for bad behavior and then working, diligently, to make those changes the new reality.

Brandon Marshall could have been banned from the NFL for life and continued on his abusive path, but instead he used his second chance to do something much harder: change. He decided to humble himself and talk honestly about his mistakes, in the hope that by sharing his experiences we can all be “better than the last generation.” He has chosen to be accountable for his crimes by openly admitting what is obvious: He has recognized his privileged status and realized how lucky he is to still be playing in the NFL, and that to make amends, he must show others “the right way”.

It is now time for the NFL to listen. Marshall is the league’s best hope to convince fans and critics that punishment and suspensions are only a small part of the solution to its domestic abuse problem. What NFL owners and executives continue to miss is that to learn from our mistakes, we have to talk about them. They can no longer count on fans caring only about a player’s stats while ignoring his rap sheet. Like it or not, there will be a next time and next time, they want to be ready for it. Talking openly about domestic abuse now, and for as long as it takes, is the thing – really, the only thing -that can lead to us making a difference moving forward.

“I’m just thankful that now I’m in a position where I can take my story and tell these guys, ‘Listen, man, you don’t have to be a product of your environment. That is the wrong path.’” ‒ Brandon Marshall (on Inside The NFL)

Change is hard, but Brandon Marshall is working at it every day.

Doug Farrar at SI.com published a related piece about Marshall that was brought to the author’s attention during the editing process. NFL Network recently featured Marshall on its “A Football Life” series. Marshall’s official twitter account is @BMarshall. The Bears face the New York Jets tonight on Monday Night Football (ESPN, 8:30 p.m. EDT). 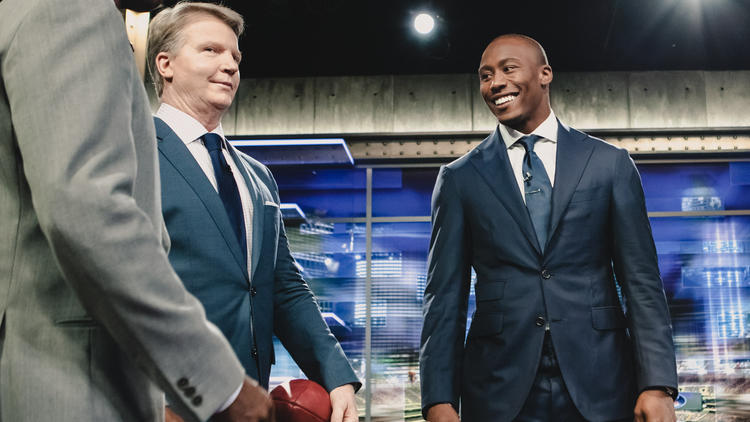 Brandon Marshall, right, with Phil Simms on the set of “Inside the NFL.” (Showtime)

18 thoughts on “The Marshall Plan: Can One Man Solve the NFL’s Domestic Violence Crisis?”