Versatile Mississippi State DL Preston Smith is making a push for day one selection in the 2015 NFL Draft after an impressive Senior Bowl and strong showing at the NFL Scouting Combine. However, while the former Bulldog may have significantly boosted his draft status in recent months, Smith’s classic “tweener” size and lack of a clearly defined position could hurt him on some big boards.

Prior to his senior campaign, Smith’s collegiate track record would have barely registered on the radar for most pro scouts. Although a starter for the Bulldogs in 2013, Smith ‒ much as he did as a sophomore ‒ served as a rotational player in defensive coordinator Geoff Collins’s flexible 4-3 scheme.

Compiling just seven sacks over his first 32 games, the defender kicked off his senior season in historic fashion, becoming the first player to be named SEC Defensive Lineman of the Week for three consecutive games. By season’s end, Smith more than doubled his career sack total, finishing with nine ‒ good for sixth-best in the SEC. The defensive lineman also recorded 15 tackles for losses, two interceptions, two forced fumbles and blocked two field goals. This breakout performance earned Smith first-team honors on the Coaches All-SEC squad as well as a spot on the Associated Press All-SEC second-team.

A draft day afterthought no more, Smith accepted an invite to the Senior Bowl where he continued to make his presence felt, amassing a team-high five tackles and a strip-sack.

Listed at 6-foot-5 and 271 pounds with long arms and huge hands,[quote align=’right’] 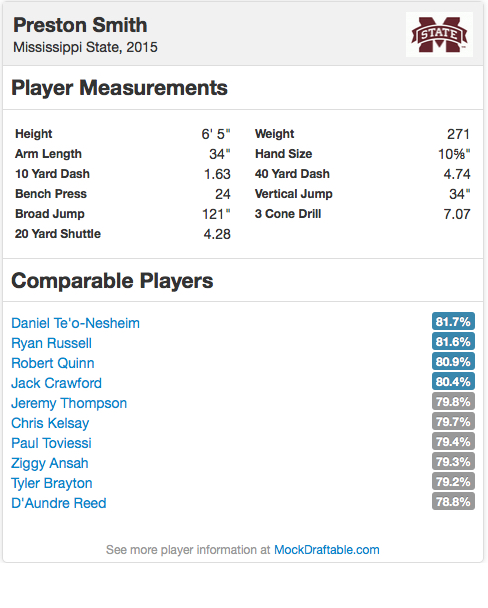 [/quote] Smith turned in one of the best all-round efforts of any defensive lineman invited to the 2015 NFL Combine. The 22 year-old ran the 40-yard dash in 4.74 seconds with a 1.63 second 10-yard split. Smith’s 40-time placed him fourth  among defensive linemen while his 60-yard shuttle run ‒ an assessment of lateral speed and sideline to sideline acumen ‒ was second best.

The first round hopeful also netted a tie atop the three-cone shuttle drill, demonstrating excellent footwork and ability to change direction. His broad jump ranked second among his position group, a good indication of his lower body explosiveness.

Smith’s 24 reps in the bench press failed to crack the top 20 ‒ a sign that the defensive lineman will need to work on his strength and stamina if he intends to become an every down defender in the NFL.

Somewhat overlooked among a 2015 NFL Draft class brimming with talented edge rushers, Smith could have easily seen his stock plummet if not for the Combine.

While Smith did not post an eye-popping 40-time and may lack elite speed off the perimeter, he makes up for it with his versatility, size, and power. Capable of lining up at almost any spot along a defensive front in either two- and three-point stances, Smith is equipped with a heavy punch and a myriad of pass rush tricks.

The defensive lineman wreaked havoc in the backfield during his senior season, whether using pure power or more technique-based rush moves. Smith was able to consistently work his way past or through offensive linemen. The video below demonstrates Smith’s execution of two moves: the rip technique and the swim maneuver.

First, the rip: Smith exhibits good footwork, following an elongated step toward the B gap with a short stutter step, keeping the blocker off-balance. Taking advantage of the teetering offensive tackle, the defender rips an uppercut through the lineman’s extended arm, breaking free into the backfield and flushing the quarterback out of the pocket.

Next, the swim move: Using his speed to attack the the blocker, Smith times the swim maneuver off his third step. The retreating offensive tackle is caught with locked knees. Maintaining movement upfield with little resistance, Smith is in position to drive the help block from the nearby offensive guard backward into the path of the QB disrupting the pass.

Smith has the ability to utilize rip and swim moves on inside rushes, but on the perimeter where his power can overwhelm is where he is at his most dangerous:

Smith is strong enough to muscle certain tackles backward into the pocket and quick enough to beat others who have shoddy footwork. In the NFL, Smith will face a higher caliber of competition but his ability to execute an arsenal of moves and counters instead of just one or two should help him transition to the next level.

Smith is larger than the average 4-3 defensive end and the Bulldogs used the defender as an interior rusher in sub-packages where his combination of length, quick hands and power caused headaches for centers and guards:

Used as mainly a 1-technique or 0-shade technique down lineman in the clips above, Smith shows off his knack for collapsing the depth of a QB’s pocket. He exhibits consistently solid leg drive, excellent hand placement and enough agility in his footwork to succeed as a one-gap defensive tackle.

When Smith plays with a high motor ‒ something that needs to be more consistent snap after snap ‒ he displays good lateral movement from sideline to sideline and the ability to pursue from the backside or behind the play:

Smith can make an impact on plays that start away from him. In a league where every yard matters, backside pursuit efforts that turn 10-yard gains into nine can make the difference on any given series. NFL teams will find Smith’s ranginess as a defender an attractive asset.

Aside from his physical traits and technique, Smith also flashes situational savvy, correctly diagnosing plays, reacting quickly to the ball, and staying active with his long arms:

In the first play shown above, the defender ‒ with his eyes in the backfield ‒ jams and shrugs off he tackle-eligible tight end and reads the design of the trick play, darting to the QB in the flat on the half-back toss pass.

In the latter two clips, Smith uses his length and active hands to disrupt throwing lanes on quick passes or when unable to generate pressure.

Having experience as both a defensive end and outside linebacker in multiple fronts, Smith is proficient at dropping into zone coverage in the flat and hook areas ‒ including on this impressive one-handed interception against UAB this season. He was not tasked with any man coverage assignments in the film reviewed.

While known more for his pass rushing capabilities, Smith also demonstrated stout technique against the run:

When able to quickly diagnose the run, Smith anchors at the point of attack and shows the ability to control his gap. Often the force or edge setter, Smith wins battles through leverage, placing his hands inside the shoulders of his opponent and using his arms to lockout and shed blockers. By directing the block in a controlled manner, Smith can work to funnel runs back inside toward the teeth of the defense, if not be position to make the stop himself.

Efforts against the run such as the below goal-line stand against LSU show Smith can be more than a situational pass rusher in the NFL:

On back-to-back run plays in his direction, Smith holds his ground and tightens the crease for the running back. Both times, the defender peels off the block and meets the ball carrier in the hole to assist on TD-preventing tackles.

While Smith typically plays with good instincts, he does tend to overcommit while rushing the passer, widening running lanes as a result.

In the clip below, the defender aggressively attacks the backfield and gets caught behind the action on several running plays:

Particularly susceptible to draws and read-option plays as the unblocked defender, Smith needs to improve his run recognition skills and patience or he risks being relegated to a sub-rusher role in the NFL.

Although a technician with his arms and hands, especially as a pass rusher, film shows that Smith does not always get out of the gate with the desired explosiveness. Described as a player lacking the “quick-twitch” athleticism (i.e., getting off the ball first) required to be an elite defensive lineman, Smith has stretches where he struggles to fire out of his stance.

While showing otherwise in the three-cone shuttle drill at the NFL Combine, the defensive lineman also struggles in game with his stop-start agility, making him ineffective on line stunts as he works across multiple gaps looking to penetrate. Smith appears to be best suited going one speed and in one direction as a pass rusher. This limitation may preclude him from fitting some of the more aggressive NFL defensive schemes that look for top-end lateral burst from their linemen.

Smith also needs improvement on tightening his arcs toward the QB when rushing from the perimeter:

Smith can be pressed wide by tackles or guided to the ground when trying to shorten his angle to the QB. When afforded space by his opponent, the defender can usually use his long arms and quick hands to push through. But if the blocker engages early, and Smith is unable to extend his arms, the defender tends to get locked up and shoved behind the play.

His lack of closing speed is also an area of concern, as he often needs an extra second to get home and lacks the mobility to track down elusive quarterbacks.

Any team that drafts Smith should be able to immediately plug the defender into a pure pass-rushing role either off the edge or along the interior.

Given his lack of ideal speed and explosiveness, he does not fit as a traditional 3-4 outside linebacker or suit all 4-3 fronts as a defensive end. But as a multiple-technique player that can line up in either stance close to the line of scrimmage, he may be able to carve out a more substantial role in a scheme-diverse defense that utilizes a hybrid defensive end/linebacker. Often referred to as the “Elephant” position, Smith has the versatility to align on the perimeter in a base defense and then shift inside in the nickel as well as the ability to jam tight ends off the line, cover short areas in a zone or rush the passer. He may not excel in any one area – though his interior pass rush skills stood out the most – but he’s steady enough in all facets of his game to not be a liability.

However, with more dynamic, and role-defined players available at his position in the 2015 NFL Draft, Smith remains unlikely to sneak into the first round despite his late surge. The former Mississippi State standout seems primed to at least make an impact as a situational pass rusher in the NFL from day one, but Smith will likely have to wait until day two to be drafted.