The Carolina Panthers continued their undefeated run with an improbable road win over the enigmatic Seattle Seahawks. Instead of winning with turnovers and a short field, the Panthers strung together three 80-yard second half drives. Philip Kibbey looks at the Q5 game map and all-22 film to break down how Carolina driving on Seattle three times showed that the Panthers are for real, even if they were lucky to win.

When Panthers quarterback Cam Newton stepped on to the field with 8:49 remaining in the third quarter, his team was trailing 20-7, due mostly to the inability of the Panthers’ offense to get going the whole day. The Q5 Game Map, courtesy of Andy Guyader, highlights that the Panthers offense struggled all game: 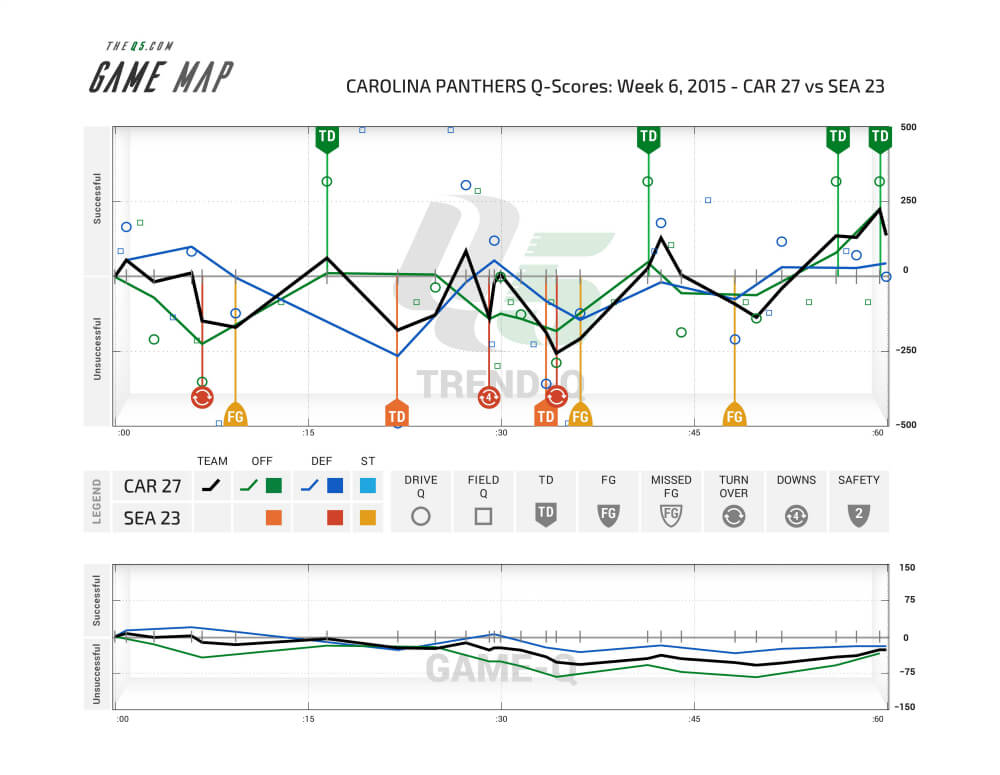 Up until this point, the Panthers had put together just one successful drive, ending with a Newton 2-yard run for a touchdown. Their other six drives were all unsuccessful, two ending on turnovers and another on downs. Things turned around for the offense after a Seattle field goal extended the lead to 13, as Carolina rattled off three 80-yard touchdown drives over the remainder of the game. On each drive, tight end Greg Olsen made pivotal catches and generally wreaked havoc on the Seattle defense.

Carolina had marched down the field into Seahawks territory through a series of 7 to 8-yard pickups, before gaining 22 yards on a Olsen crossing route, aided by a pick play. Already four minutes into the drive, the Panthers face a 2nd and 10 after Devin Funchess failed to haul in a pass in tight coverage at the 12 yard line. Carolina lines up in 21 offensive personnel on the 24 yard line with tight end Ed Dickson to the left of Newton, opposite running back Jonathan Stewart in a Red Y Nasty formation (with the “Y Nasty” designation referring to the tight split between Olsen and the right tackle). From this tight alignment Olsen lines up in the slot and runs a wheel route to the strong side. Wide receiver Philly Brown is lined up wide on the strong side and runs a dig route, while Ted Ginn Jr. lines up on the opposite side and runs an out route.

The Seahawks counter with a 4-3 base defense, playing Cover 1 buzz, with strong safety Kam Chancellor the buzz defender. Sherman lines up in press man alignment opposite Brown.

After the play action fake to Stewart, the RB stays home to block with Dickson. Olsen’s wheel route creates a mismatch with linebacker Kevin Pierre-Louis, as cornerback Richard Sherman and strong safety Chancellor crash down on Brown’s dig route, opening up the right side of the field for Olsen. The TE breezes past Pierre-Louis and sprints for open space while Newton lofts the ball to him. Olsen hauls the pass in at the 7 and is tackled out of bounds at the 2, for a gain of 22 yards. A better throw by Newton puts six on the board, but this was a big play for the offense.

Two plays later Stewart maneuvers through traffic for a touchdown, to bring Carolina within one score. But the play above was crucial, as it allowed the Panthers to get deep in the red zone without challenging Seattle’s physical and talented secondary. The play design was simple, giving Newton an easy read for a big gain, rejuvenating an offense that had struggled all day.

Following their third quarter TD, the Panthers had two unsuccessful drives before staging act 2 of their comeback. This drive started at their own 20 with 8:08 remaining and saw the Panthers execute a variety of short passes for gains of 7-11 yards. Now, with under five minutes to go in the game, the Panthers again find themselves in Seahawks territory. Carolina lines up with 11 offensive personnel and trips to the left. Olsen lines up using another tight split in the slot on the weak side, while Newton is in shotgun with fullback Mike Tolbert to his right.

The wide receivers run a series of routes to create a three-level concept. Funchess, the inside receiver runs a seamtreak route up the hashmarks. Brenton Bersin, the middle receiver, runs a quick in route, and outside receiver Jerricho Cotchery runs a deep comeback route. On the opposite side of the field, Olsen gets a free release and runs a post, drawing coverage from Sherman. As Olsen pivots inside, the cornerback breaks to jump the route and take away the option for Newton; however, the QB slings it over the corner’s reaching hand to complete the pass to Olsen, who turns up field and rumbles to the one-yard line.

The next play, Stewart leaps over the pile to put the Panthers within three points of the Seahawks, with 3:55 remaining.

The Panthers defense took advantage of an offensive holding call by the Seahawks to stymie the Seahawks drive. Jon Ryan‘s punt into the end zone gave Carolina the ball their own 20 with 2:20 remaining and one timeout left. Newton completed a series of mid-yardage passes to Ginn, Dickson, and Funchess to march the team down the field, the latter of which was a huge 16-yard completion on 2nd and 19. After a key third down reception by Cotchery and a spiked ball, Carolina was staring down a 2nd and 10 on the Seahawks 26 with 37 seconds to go.

The Panthers offense lines up with 11 personnel in the game in a similar formation to the play they scored on earlier. This time RB Fozzy Whittaker is to the right of Newton with the same trips formation to left running three-level concept routes.

The defense, however, is a total mess. Initially, the Seattle comes out in Cover 3 buzz, just like the play above. But instead of Chancellor acting as the buzz defender, it appears that Thomas is playing the buzz defender this time in an effort to confuse Newton with a new look. Based on reports after the game though, a Cover 2 scheme was radioed into K.J. Wright, wearing the green dot in place of injured LB Bobby Wagner. Sherman, who is close to the Seattle sideline presnap also gets the change relayed to him. However, it appears that Earl Thomas never received the message and stays as the buzz defender, expecting Sherman to grab the deep third of the field behind him. After the game, Thomas admitted he was in Cover 3 for the play.

However, since Sherman is now in Cover 2, he is not responsible for the deep third and now must guard against Whittaker on the wheel route, or Olsen should he cut out of this seam route toward the sideline or the corner of the endzone. The result of this confusion is disastrous for Seattle:

With nobody defending behind Thomas, and Chancellor shaded toward the trips side of the field, Olsen runs right up the numbers and into the end zone where Newton connects with him for a 26-yard touchdown to put the Panthers up for good. From the end zone angle, you can actually see Thomas immediately gesture to Sherman after the catch wondering why he wasn’t covering deep and Sherman gesturing back wondering the same thing about Thomas. Olsen’s dominant performance late in the game helped jump start and ultimately propel the offense to victory. Newton stepped up late and started making accurate throws in tight windows to pull out the win. However, as the game map shows, this Carolina team was lucky to win as they were on aggregate, unsuccessful most of the game. It is always best to be lucky and good.