Coming off a year that ended with him on the injured reserve list (IR) followed by foot surgery in February, one burning question yet to be answered in Patriots camp is what kind of impact Tarell Brown can have on his new team. A resurgent Brown could solidify a depleted Patriot secondary; perhaps Bill Belichick hopes Brown could be this year’s Aqib Talib?

After winning a National Championship at Texas, first-round talent Brown dropped to the fifth round of the 2007 draft due to a pair of marijuana arrests. A speedster – a 4.45 40 yard dash with a1.46 10 yard acceleration – he worked his way up the 49er depth chart while improving his strength, technique, and consistency.

Pairing Brown with Carlos Rogers, the Niners featured one of the league’s top two pass defenses from 2011-2013 during which period Brown gave up only six touchdowns and missed a mere ten tackles; only Darrelle Revis and Richard Sherman compiled better overall records:

Although ranked as the fifth best overall cornerback in the Pro Football Focus 2012 ratings, Brown has largely flown under the radar and has even been called “The Best Corner You Don’t Know.” Here’s why:

Analyst Mike Tanier points out that these ratings only grade plays a corner is involved in. Further, Tanier states:

Evaluating cornerbacks is all about negative space, the plays they didn’t have to make, and those can be found on the far right sides of the PFF columns, where the number of times each defender is targeted are tabulated.

Brown is always ranked in the top ten. In addition to Revis, Sherman, and Patrick Peterson, Tanier wrote last season, “the ‘cornerbacks opponents avoid’ list is full of other well-regarded defenders like Joe Haden, Sean Smith, Vontae Davis, and veterans having good years on bad teams like Tarell Brown.

In the 2011 PFF data displayed above, Brown ranks fourth in receptions per cover snap. He was targeted even less often than Revis, and his target rate has remained extremely low through his career. He does not give up deep balls and can be very tight in coverage. Clearly, some of Brown’s strengths are not captured by the most commonly used rankings.

He also has “long speed” and is rarely beaten deep, even by the fastest receivers. In fact, no corner has yielded fewer touchdowns over the four years Brown has been a starter. When he is beaten, it is often despite good coverage because of a perfectly delivered ball.

Despite average size for his position (5’ 10 1/2” and 194 pounds), Brown is strong enough to jam even big receivers at the line. Moreover, his instincts and excellent ball skills enable him to mitigate some of the advantages big receivers tend to have against CBs, as here against Larry Fitzgerald:

In seven games against Larry Fitzgerald, Brown has given up a total of seven receptions and 81 yards – with two interceptions – effectively shutting him down while sharing coverage with Rogers. 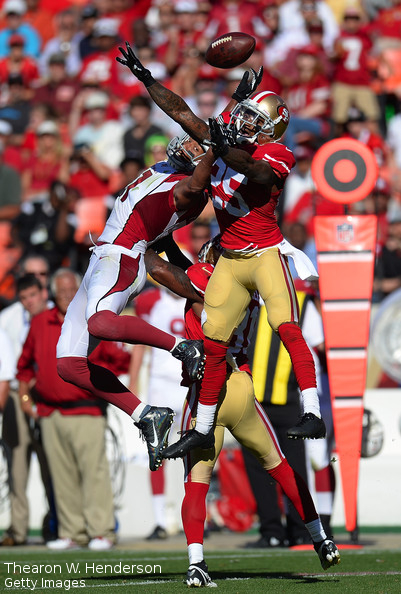 In the absence of Brandon Browner, then, the Patriots might find it useful that Brown has held his own against a long list of big receivers, often able to recover when apparently beaten, as he does here with Marques Colston:

Plus it doesn’t hurt that he has some real ups for a small guy, as seen here breaking up a pass to Antonio Gates: 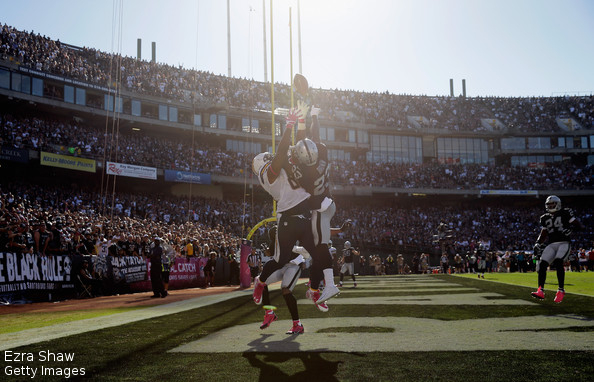 As effective as he has been as a cover corner, Brown has also excelled in run support. with good technique and an appetite for contact, as evidenced by these numbers from 2011:

Brown is an elite tackler who hits above his weight, is physical, and plays very aggressively against the run.

Brown’s success derives from a combination of technique, as seen here in upending Robert Meachem:

The power to drive back even 230 pounders such as 230 pound running back Bernie Wells:

And a basic relentless in pursuit of the ball carrier that can be – often problematically – uncommon in a corner back, as seen here in his wrapping up of Brandon LaFell. 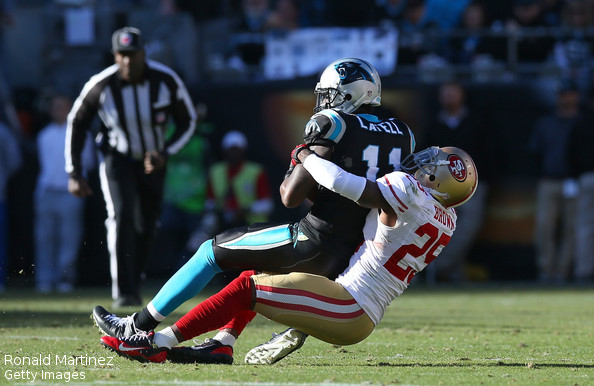 His height can limit his effectiveness against bigger receivers when the ball is placed perfectly by the QB, as can be seen in these stills of completions to Julio Jones and Andre Johnson: 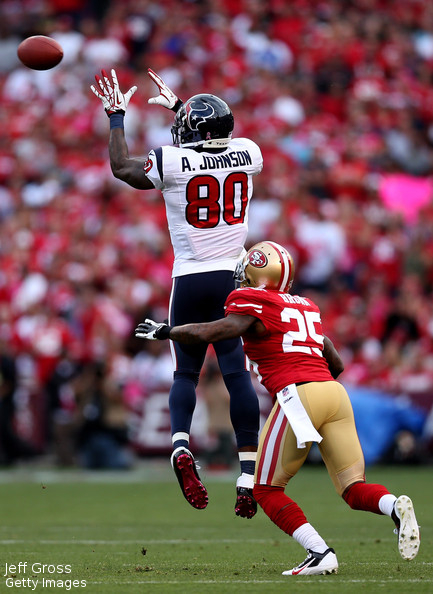 Overall, Brown has the flaws of his virtues – he has agility and footwork, but not height or length; he rarely is scored upon, but he will allow underneath receptions if the QB has the time or the talent.

It is here, with elite passing games, that Brown showed occasional vulnerability last year – from Tom Brady, Peyton Manning, and Philip Rivers. Leery of being burned deep, playing in what may be perhaps considered more conservative coverages with less safety help and a lesser pass rush, he at times played over the top, conceding short receptions. Yet despite this approach, he still allowed only one touchdown and 521 yards.

In his worst game of 2014, against Denver, he played so far off against receivers that Manning completed nine short passes underneath, albeit for only 91 yards.

Brown’s tendencies, however, were clearly apparent to Manning, as can be seen on these two plays from the same drive. On this play, Manning catches Brown playing off, though Brown manages to come back in to break up the pass to Andre Caldwell:

Two plays later, Manning anticipates Brown hesitating at the 25 yard line to prevent a first down:

This allows, Demaryius Thomas to blow by him on his way to the endzone and Manning looks to exploit the error, though Brown trips Thomas, saving himself from giving up a touchdown.

When Brown stepped up and crashed into Pierre Thomas at the one yard line in New Orleans, November 2013, he saved a touchdown with an impressive tackle, but essentially ended his career in San  Francisco:

The play resulted in several broken ribs, torn cartilage, and  a month on the sidelines. Tramaine Brock stepped in and played well, and Trent Baalke reportedly took a $10M/3 year offer off the table.

Moving to Oakland for 2014, Brown suffered a stress fracture in his foot in Week 4, but played through it, accumulating 1,000 snaps before ending the season on IR. Brown re-entered free agency in a walking boot having just turned 30. Teams were reluctant to sign him due his age and the uncertainty around his recovery.

Yet in Oakland, Brown gave up only one touchdown all year and missed only four tackles; his coverage snap/reception ratio on 46 receptions ranked fifteenth in the league.

While his statistics declined a little, film suggests that the biggest difference in his year was context – the quality of the defense around him: Without a pass rush, pass coverage was simply more challenging.

Bothered by his chronic foot injury, less-frequent safety help, and leeriness of quarterbacks with time in the pocket, Brown played more cautiously and less aggressively. He challenged receivers less often and afforded them more of a cushion.

Note here how the Raiders play a very loose off man against Tom Brady:

Brown, playing well off his receiver, gets accordingly burned.This following clip, though, suggests that he has not lost a step:

While he gives up the touchdown – his only one of the season – he keeps pace with Michael Floyd, whose 4.47 Combine speed makes him one of the fastest receivers in the NFL:

With an improved Patriots’ pass rush, it is probable that we will see a resurgent Tarell Brown starting – as long as he is healthy. With his scheme flexibility – he has shown the ability to play zone, press man, and off man (without safety help) – he can provide a savvy veteran complement to Malcolm Butler. Moreover, his bend-don’t-break playing style and his ability to play inside or outside could offer Belichick the versatility he so values and earn him a chance to roam the secondary in Foxboro for at least this “prove-it” year.

One thought on “Tarrell Brown Is Better Than You Think”