Cries of foul play follow the New England Patriots, and legendary coach Bill Belichick, as night follows day. The latest incident found Baltimore Ravens coach John Harbaugh claiming the Patriots use of an unbalanced line and ineligible receivers was somehow “deceptive.” The NFL has deemed the plays “legal” and another media-driven controversy is underway.

The effectiveness of Bill Belichick’s innovative formations with eligible-numbered players reporting as ineligible receivers in New England’s victory against Baltimore has been drowned out by the clamor over cheating and the rules of the game. The football brilliance of Belichick in this instance is only now coming to light. Even still, most of the focus has been on the third of three plays, largely because Harbaugh drew a penalty for unsportsmanlike conduct over it.

In truth, all three of the plays proved successful, accounting for 46 of the Patriots’ 80 yards on the critical scoring drive. The results rested far more on subtlety and creative trickeration than has generally been explored. Specifically:

For all the controversy sparked by those who don’t know the rules and how they apply to the formation, the strategy has actually perhaps been under-appreciated, with the whole sequence worthy of a deeper look.

The first of the three plays occurs with 9:33 to go in the 3rd quarter. As anyone reading this probably already knows, Vereen declares himself ineligible and lines up on the line of scrimmage in the slot to the right, which renders tight end Michael Hoomanawanui eligible as the furthest man to the left on the line of scrimmage ‒ despite lining up in the traditional left tackle spot.

When examining this play as the first in a sequence of three in the drive, though, consider two things:

Terrell Suggs flies by Hoomanawanui, trying to get to Brady. The right side linebacker doesn’t adjust because he’s focused on Danny Amendola in the slot, presumably not realizing the TE is an eligible receiver on his way to a 16-yard pick-up. Moreover, the Ravens defense is undermanned here, focusing on the strong side of the formation which also appears to be the side with three receivers.

It’s worth noting that although the penalty comes later, Harbaugh is already sufficiently annoyed as to catch the eye of the cameraman.
[quote align=’right’] Not annoyed enough, though, to call timeout or prepare his team for another formation using a declared ineligible player just two plays later.

That may be harsh. Well, yeah, it is harsh. However, on the play after the first unconventional formation, Brady ran the play clock down to five seconds before calling for the snap. Although on the play following that the Patriots did snap it quickly – with 25 seconds left on the play clock – that was following a penalty; the Ravens’ problem was not solely a function of New England running roughshod over Baltimore with the no-huddle. Why Harbaugh didn’t use that time to direct people to look out for trickery he appears to have identified is anyone’s guess.


This second version of the formation, with 8:23 remaining in the 3rd in quarter, is arguably the most overlooked of the three, perhaps because the reception does not go to the “unexpectedly eligible” player in Rob Gronkowski, lined up at LT.

The success of the play, however, is again a function of the mismatch in numbers created by having an unexpected and, therefore, unaccounted for receiver on the left side.

Note how the right side LB is edging to his left at the snap, suggesting he doesn’t realize there are three, not two, eligible receivers on his side. Because of this, when he sees Gronk leave the line and begin his route, the linebacker is caught between two assignments, allowing Brady to hit Julian Edelman for an easy gain of eleven.

This sequence hasn’t stood out in the discussion of trickery because Edelman makes the catch and nobody is surprised to see Gronkowski running out as a receiver – or, for that matter, getting a free release, which mysteriously happens a lot. Clearly, though, Minitron is open due to the hole in the coverage – even with safety help over the top – created by the right cornerback covering Amendola wide and the LB having to mind the Gronk.


Next, the Patriots go up-tempo, realizing that Baltimore and Harbaugh are not only confused by the unbalanced line and ineligible receivers – they are covering them. Snapping the ball on the next two plays with 19 seconds and 16 seconds on the play clock, respectively, the latter is the third of the declared ineligible plays and the source of the controversy. The issue here is whether or not the Ravens had time to substitute once Vereen declares himself ineligible.

Brady made his own position on the matter clear enough:

“Maybe those guys gotta study the rule book and figure it out,” Brady said. “We obviously knew what we were doing and we made some pretty important plays. It was a real good weapon for us. Maybe we’ll have something in store next week.”

“I don’t know what’s deceiving about that,” he added. “[They] should figure it out.”

Given how the Ravens line-up, though, it seems unlikely they knew what to do about the play with or without substituting. Recall the play at 9:33: With 7:19 to go in the 3rd, the Patriots are lined up in exactly the same way as on the first of the three, and the Ravens “adjust” into the exact same read on which they were burned five plays earlier:

The defense is again more worried about the “Gronk side” of the formation and the right LB is caught quite literally between Amendola and Hoomanawanui (watch carefully as they fly right by him on either side) racing down field in tandem, leading to another easy completion to the tight end for another 16 yards.

There should be no shame in getting outwitted by the NFL’s Great Deceiver. And certainly, that’s gotten much of the press.

Regrettably, though, for football fans, that press has come at the expense of looking at just how sophisticated these formations are not just in their own right, but in sequence. Yes, Belichick may be a genius in terms of Xs and Os. But it’s the little things like Vereen exhibiting the same behavior to prevent tells and the versatility of the players to adapt in this fashion that suggests a level of preparation that sets him apart – and which makes him so much fun. 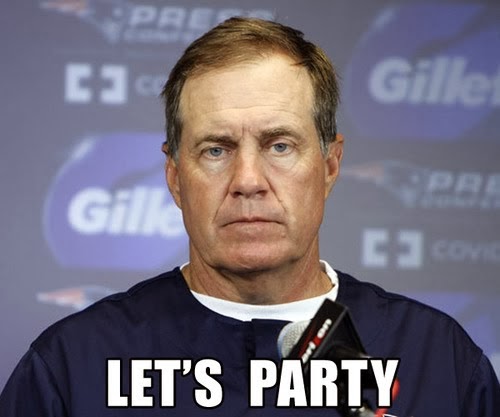 Follow James on Twitter @TheReverendum. Check out his other work here, or read his thoughts on the NFL draft as spectacle here.

One thought on “Reporting As Ineligible: An Appreciation”