The National and BLESTO scouting services issue a limited number of NFL Scouting Combine invitations, forcing many NFL Draft prospects to begin their journey not in Indianapolis, but at a “Pro Day” on a nearby college campus. Mark Schofield traveled to Williamsburg, Virginia to attend William & Mary’s Pro Day, getting a closer look at Tre McBride and the other hopefuls vying for a spot on an NFL roster.

In the weeks following the combine, scouts and coaches crisscross the country, visiting schools, searching for the next draft diamond. On an unseasonably chilly morning in southeastern Virginia, about twenty college players stepped onto the campus of William & Mary in Williamsburg, Virginia, in pursuit of their dream. 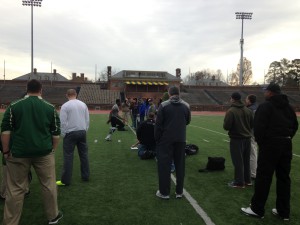 For some players, like wide receiver Tre McBride, this day was about building on relationships he formed at the Scouting Combine, where he was a full participant and improved his draft stock with an impressive showing, including a 4.41 40-yard dash. For others, like Tribe defensive end Mike Reilly, it was a chance to show scouts first-hand why the Colonial Athletic Association’s Defensive Player of the Year deserved an invitation to Indianapolis. Some players from smaller schools were hoping to make a name for themselves, such as Antonio Brown, a defensive back from Virginia University at Lynchburg, or Nash Johnson Nance, a quarterback from Division III Hampden-Sydney.

And for the windbreaker-clad representatives of the 15 NFL teams in attendance, it was time to grab their stopwatches, take copious notes, and find the next Malcolm Butler.

Getting Off On The Right Foot

The morning began in a small workout room. After measurements were taken, the prospects took part in two drills inside: the bench press and the broad jump. While McBride would stand on his impressive Combine numbers, the others were put through their paces. Some numbers from this portion of the program stood out: William & Mary defensive tackle Jasper Coleman notched 30 reps on the 225 pound bench press, while Reilly tallied 26, which would have placed both near the top of DEs at the combine. 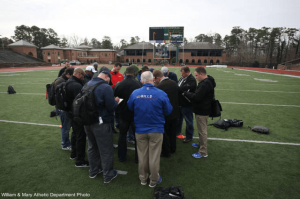 Once completed, players and scouts made their way outside to take part in additional measurable and positional drills. First up was the vertical leap, followed by the 40-yard dash. For the 40, the scouts grouped near the finish line and all kept their own times. Afterwards, the scouts huddled and compared times on each player.

According to an NFL player representative who was in attendance, this takes place at every Pro Day. Since there are several clubs not in attendance at each school’s workout, one scout assembles the results for each player and files a “pool report” of results for all NFL teams. The scouts compare notes and times for each participant to make sure that the numbers are in line before they are sent to the other clubs. This is a “scouts-only” meeting: agents, reporters or family members are quickly whisked away – or even reportedly shouted-down and publicly shamed – if they try to listen in on the discussions. 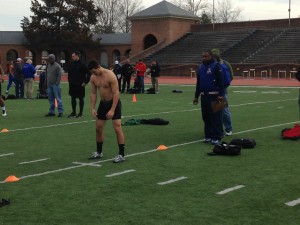 Next up were the shuttle and 3-cone drills. A representative from the San Francisco 49ers explained to participants the proper form for the shuttle drill, but the first few players failed to listen, and found themselves sprawling on the turf as a result. The shuttle drill begins with the player standing next to a cone on the 15-yard line, with additional cones on the 20- and 10-yard lines. The player sprints five yards in one direction, touches the line, sprints ten yards to the other cone, touches the line, and sprints five yards back through the starting position. The trick, according to the scouts, is not to “jump” at the line as you try to touch it, but to plant your foot, gather, and turn.

The number of stumbling players prompted a scout from the New York Giants to implore the players: “Believe us. We’ve seen this more than you have.” Reilly turned in a very impressive display during this event, posting a time of 4.18 seconds, which would have been second among defensive ends at the Combine.

Showing Off Your Skills

Then, the main event: positional drills. Another player representative told me, “what you [look] for here are which scouts watch the drills.” While scouts all stay for the measurables, some scouts only watch one or two positions work out, if they watch any of the positional drills at all.

First, the offensive skill players went through passing drills, directed by a representative from the Cincinnati Bengals. Nance handled the throwing duties while McBride and a number of other receivers, tight-ends, and running backs ran a variety of routes. The signal-caller showed impressive arm strength and the ability to put touch on the ball when the route required timing to succeed. The Hampden-Sydney prospect has attended a number of workouts for CFL teams, and was a participant at the NFL Regional Combine in Baltimore. On this quick clip, the QB hits McBride on a deep out route along the sideline:

McBride was impressive during the positional drills, running crisp routes, catching the football with his arms extended from his body, and grabbing nearly every pass thrown in his direction. One of his more impressive moments was when he stumbled coming out of his break on an option route, yet secured the throw from Nance as he was tumbling to the turf. He also made a leaping catch on an out-route along the sideline on a high throw, similar to one of the plays highlighted in the draft profile of the receiver.

His teammate and fellow receiver Sean Ballard also performed well during this portion of the morning,  running solid routes, showing good hands while making a few acrobatic catches during the drills. It was interesting to note that all the scouts watched these drills intently.

Next, a scout from the Philadelphia Eagles put Coleman and Reilly through the defensive lineman drills. Reilly showed solid footwork, good quickness and impressive strength during these drills. On this short clip, he displays quick feet for a man of his size:

He and Coleman were asked to use quick step overs of blocking dummies, agility tests through a course of blocking dummies, and some strength and explosion drills. In one such drill, the player lines up in a stance low to the turf and on the coach’s signal fires out and forward into a blocking pad being held by another player, as depicted in the below series of photos: 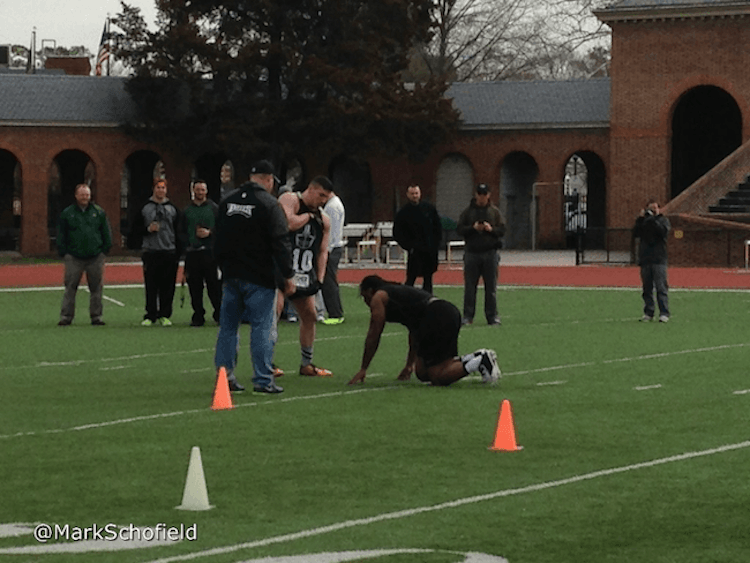 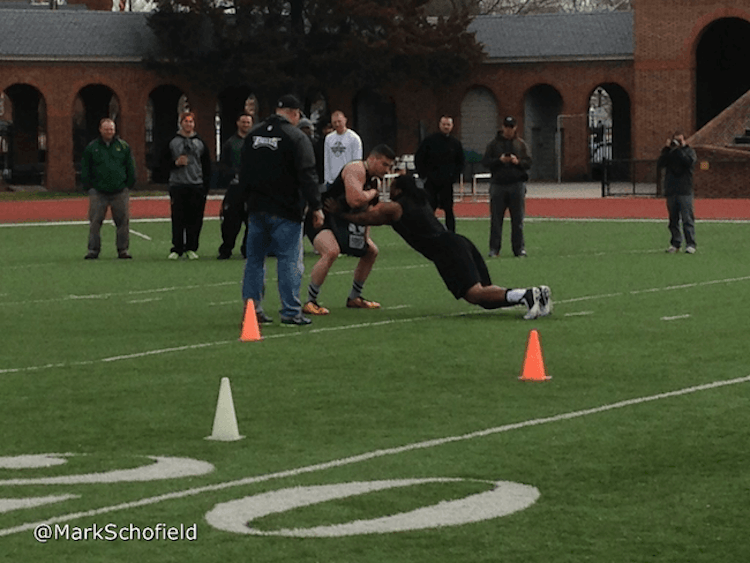 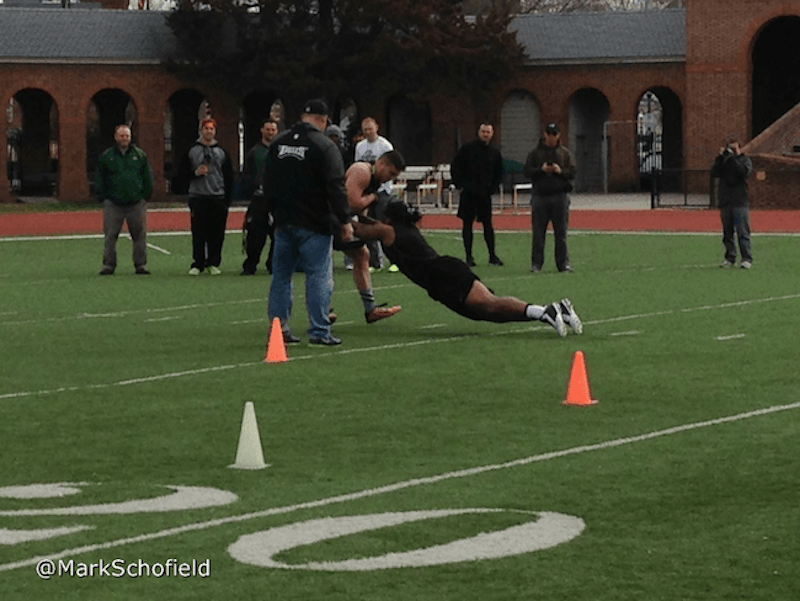 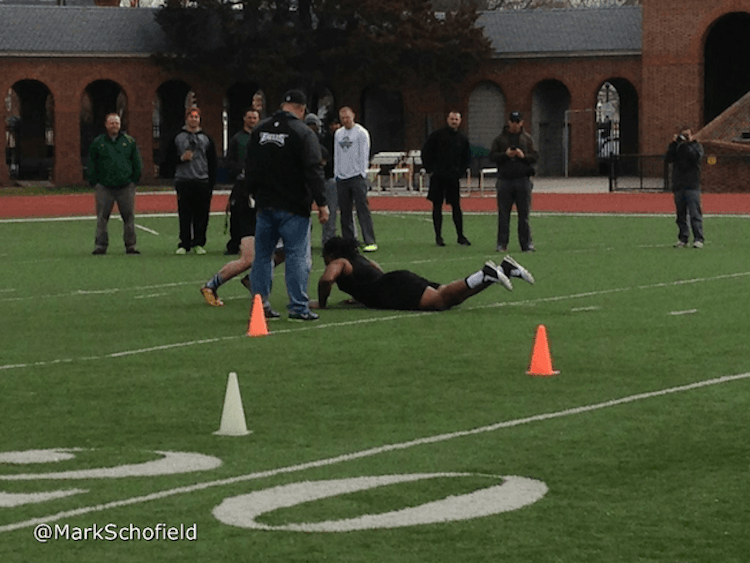 Coleman stood out during that final drill, bursting off the turf and into the blocking shield held by Reilly.

Finally, scouts from the Kansas City Chiefs and Seattle Seahawks wanted to get a look at McBride and Ballard fielding punts. Mason Studer, a kicker from Division III Christopher Newport University, handled the kicking duties. The coaches instructed the punter to angle punts in varying directions, and observed how McBride and Ballard tracked and secured the kicks. The returners were also asked to begin with their backs to the punter, and then turn after the kick to identify the flight of the football and secure the punt. Ballard was spotted chatting with a Washington scout at the end of this drill. For this portion, only a handful of scouts remained.

For his part, Studer displayed a very impressive leg. I spoke with one of the Christopher Newport representatives who were in attendance, and he raved about how Studer handled all three kicking duties for his team, and fared well at the California Regional Combine. The kicker showed considerable accuracy with his punts, placing them exactly where the coaches wanted for this drill, as well as giving a lengthy hang-time to each kick. While he was not asked by the scouts to kick field goals, I did see him warming up and he showed tremendous leg strength while place-kicking, hitting 50-yard field goals with ease. While I would be surprised if Studer is drafted, he will likely be invited to a camp.

Then, as quickly as the morning began, it was over. Scouts packed up their notes and bags, headed to the parking lot, and got in their rental cars to drive the 45 minutes south to Old Dominion University. Taylor Heinicke’s Pro Day was next on the agenda.

For the players, weeks of preparation had led up to this moment, and now all they could do was hope that their effort on this morning was enough to get noticed. For some players, like Reilly, Coleman and Ballard, it was clear that their work had caught the attention of scouts. Reilly’s performance likely earned him a draft selection, sometime in the later rounds, while Coleman and Ballard’s performances might earn them an invite to a training camp or two once the draft is over.

For McBride, his impressive winter and spring rolled on. Based on studying his film now seeing him up close, I believe that this receiver will hear his name called sometime on Day Two of the NFL draft.

In all, representatives from 15 NFL teams were in attendance: the Raiders, Bills, Chargers, Texans, Seahawks, Bengals, Eagles, Chiefs, Washington, Titans, Jaguars, Colts, Patriots, Ravens and Giants. Scouts will add these reports to the growing volumes of information teams have on potential draft choices, and continue to gather data on every possible draftee.  The search for the next draft diamond rolls on.