The 2015 NFL Draft features two highly lauded quarterbacks, some big-school prospects with question marks, and a few potential diamonds in the rough. Colorado State Pueblo QB Chris Bonner is one of those intriguing candidates and Mark Schofield dissects his potential.

Chris Bonner is flying under the radar as higher-profile prospects receive the lion’s share of attention. However, that will change as teams dig into the tape on the big gunslinger.

Following a junior college stint, the quarterback enrolled at Division II Colorado State-Pueblo for the 2013 season. Bonner was an instant starter for the tremendously named ThunderWolves, completing 60% of his passes for 3,413 yards and 33 touchdowns as a junior. CSU-Pueblo got bounced from the 2013 Division II playoffs in the opening round, losing to Grand Valley State, but Bonner and company finished the job in 2014. The QB completed 56% of his passes for 3,291 yards and 30 touchdowns, leading the ThunderWolves to an NCAA title with a victory over Minnesota State-Mankato in the championship game.

CSU-Pueblo ran a multiple concept offense incorporating both spread and pistol elements, but Bonner did most of his work under center in the 3/5/7-step dropback game. He is very mobile for his size with impressive footwork. His coaches designed plays to move him out of the pocket often, where he thrived attacking the edges and throwing on the run.

Bonner was not invited to the 2015 NFL Scouting Combine. His CSU-Pueblo player bio lists him at 6’ 7” and 235 pounds. He will take part in multiple pro days both throwing and taking part in positional drills over the next two months. Bonner has no notable history of injuries.

Given his experience working both under and away from center, Bonner fits the mold of a “pro-ready” quarterback. Like many QBs, solid footwork begins before the snap. Here is a still of the signal-caller under center: 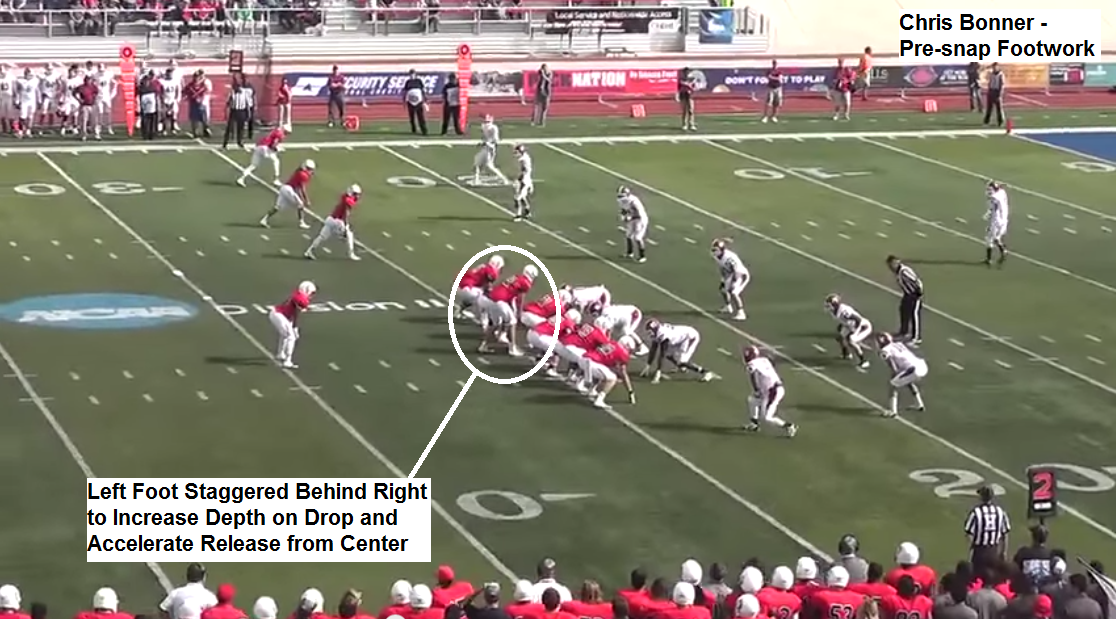 Bonner staggers his left foot deeper into the backfield than his right, providing a head-start on the dropback. Positioning the left foot in this manner results in his first right step on every dropback extending deeper into the pocket. In addition, the staggered stance accelerates clearance from the line of scrimmage, decreasing the odds that his feet will tangle with the feet of his center or a pulling guard. 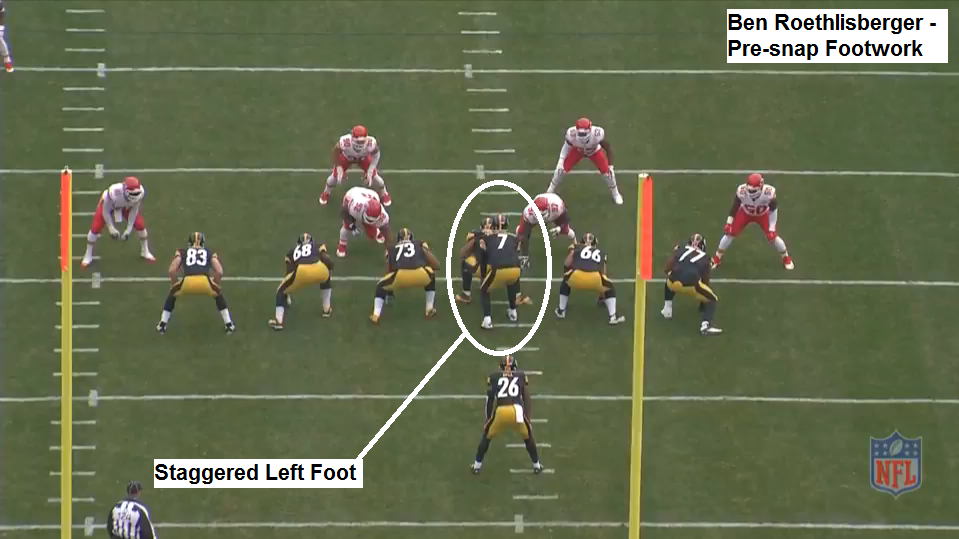 The ideal depth for a quarterback on the three-step drop is four and one-half yards, but the crucial factor is timing. Getting set and delivering the ball to the intended target quickly is the priority, not distance from the line.

For a right-handed quarterback, the drop is executed as follows: Reach step back with the right foot, crossover with the left, followed by a shorter third step with the right. The goal is to plant the right foot and throw almost immediately. The quarterback should have the football in his right armpit, ready to aim and fire as he hits that third step.

This play is flawless because of the quarterback’s footwork and timing. Bonner hits the third step with the football tucked in his right armpit. He plants, sets his body, and throws right off the third step. The receiver runs a quick curl against Cover 3 and the cornerback has no chance to break on the football before the pass completion.

Additionally, the timing from the quarterback (and his tremendous size) negates the risk of the throw being batted down at the line of scrimmage. Bonner’s skills turn this into a simple pitch-and-catch.

With the ball at the ThunderWolves’ 41-yard line on the opening play of CSU-Pueblo’s tilt against Chadron State, Bonner uses a five-step drop from center and delivers a perfect throw. The quarterback plants his final step on the 34-yard line, giving him a depth of seven yards from the line of scrimmage on his drop. His lengthy stride and solid fundamentals get him in the right spot to make his progressions.

Bonner stands tall in the pocket, finds his target and absorbs a shot from a defensive lineman just after the throw – which is perfect.

On this next play, Bonner uses a seven-step drop to throw a slow-developing vertical route:

Here, Bonner hits that nine-yard mark with ease. He then works toward the line of scrimmage  to avoid outside rushers  before releasing the football, though the throw is off-the-mark. This is often referred to as climbing the pocket, where a passer moves back to the line of scrimmage to avoid pressure off the edges.

Throwing on the Move

Bonner may be at his best is throwing from outside the pocket. He moves very well for a player of his size, and his coaches moved him outside the pocket often to take advantage of this ability. This play is from CSU-Pueblo’s meeting with Sam Houston State:

The QB fakes an off-tackle run to the left, before wheeling right and rolling out. Bonner quickly turns around to identify his wide receiver, running a deep comeback route. Still on the move, Bonner does a great job of turning his left shoulder to the target and delivering an accurate throw along the sideline.

Notice the quarterback’s left hand – while on the move Bonner keeps his off-hand glued to the football. This is a plus in terms of ball security, and mirrors the work of Andrew Luck at the next level.

The ThunderWolves returned to this design later in the same game – only with a slight wrinkle – and the play went for a touchdown:

Bonner again fakes the off-tackle run to the left, then wheels to the right to identify his downfield target. This time, however, his WR runs a deep corner route into the end zone. Overall, the quarterback’s mechanics are very solid. He keeps his offhand tucked to the football while moving from the pocket, and then squares up to deliver a deep toss. His receiver makes a great adjustment on the ball and the ThunderWolves put six more points on the scoreboard.

Given his experience in the dropback game, it should be no surprise he has developed great awareness throwing from the pocket.

On this play against Sam Houston, Bonner fakes the run left before retreating into the pocket. The defense blitzes a defensive back off the edge and the quarterback glides forward, evading the pressure and delivering a strong throw on the curl route. This is another example of how Bonner climbs the pocket effectively.

Aligned in the shotgun with the football on the left hash mark against the Bearkats, Bonner again avoids pressure by climbing the pocket before delivering a perfect throw on the deep out:

The ThunderWolves run a standard Cover 3 beater, with the slot receivers on the right implementing a go/out combination. The defense blitzes off the edge and Bonner recognizes it, climbs the pocket, and throws a strike along the opposite sideline. This pass covers a great deal of real estate, but the quarterback places it accurately.

Finally, this play from CSU-Pueblo’s victory in the National Semifinals over West Georgia:

Three pass rushers break into the pocket, but Bonner escapes the pressure by moving to the line of scrimmage. The QB  fires a rocket to his WR on a crossing route. From the end zone view you can see Bonner evade the rushers while keeping his eyes in the secondary and then deliver the hard, accurate throw to his WR.

Bonner has a very strong arm, as seen on a number of plays already highlighted. One more example of his arm strength, on the deep ball against West Georgia:

The football explodes out of his hand on this throw, and he’s helped by a tremendous extension and catch from his wide receiver. Bonner released this pass from the CSU-Pueblo 19-yard line, and the catch is secured near the opposite 36-yard line. The pass traveled approximately 45 yards in the air. The QB makes this throw with a simple stride and flick of his wrist, demonstrating the power in his right arm.

The first hurdle Bonner faces in a transition to the NFL is the question of the level of competition he faced in college. A number of Division II players are on NFL rosters, including quarterback Dustin Vaughan of the Dallas Cowboys and New England Patriots Super Bowl XLIX hero Malcolm Butler. Two current starting quarterbacks in the NFL came from the FCS level, including Tony Romo and Super Bowl winner Joe Flacco.

Bonner must convince NFL scouts and coaches that his arm strength and natural ability will succeed in a faster-paced environment. The lack of an NFL Scouting Combine invitation isn’t always a negative; Bonner has three different pro day workouts scheduled (at CSU-Pueblo, Colorado and San Diego State) and can use those opportunities to display his natural ability. He should also earn a few private workouts in the lead-up to the draft.

Bonner needs to eliminate his tendency to lock on to a receiver after the snap and stare him down; this practice has resulted in interceptions and near-interceptions throughout his career. On this first play, the quarterback stares down his receiver on a curl route and nearly throws a disastrous interception in the national semifinals:

Bonner never takes his eyes off his intended target and the underneath flat zone defender reads the quarterback’s eyes, undercutting the route. Thankfully for the ThunderWolves, the defender cannot secure the interception; otherwise, this was a Pick-Six in the making.

The offense has a trips formation to the left, with the quarterback in the shotgun. Simulating a wide receiver screen to the left, the inside WR in the trips gets a free release and runs a post pattern into the end zone. Bonner fakes the screen, then locks onto the post route, never looking away from the target despite four defenders converging. Even facing quadruple coverage, the quarterback forces the throw. This horrendous decision is inevitably intercepted.

To succeed at the next level, Bonner needs to stop staring down his primary targets. Developing his pocket vision will be a big challenge for the prospect.

While generally accurate, Bonner does sail some throws over the intended recipient. Take this play against Chadron State:

Here, Bonner does a good job of working through his progressions and not staring down any one receiver. With his first two reads covered, he comes down to his checkdown, an underneath option route.

However, as the wide receiver breaks to the outside, Bonner air mails the throw over his head. What could have been a nice example of his ability to work through progressions and deliver an accurate throw late in the play is instead evidence of his inaccuracy from the pocket.

This play against Sam Houston is another example of missing a target:

This is the same Cover 3 beater play referenced earlier. Only this time, instead of delivering a strike along the sideline, Bonner badly misses an open receiver. He will need to connect on a more consistent basis to convince pro scouts and coaches that he is worth a roster spot.

With his size, footwork, and ability to evade pressure in the pocket, Bonner reminds me of Ben Roethlisberger. Obviously, Bonner is a very raw talent and it remains to be seen whether he can succeed against a higher level of competition. But on film against Division II opponents, Bonner evokes images of Big Ben.

Bonner is a project, for sure. Right now, he’s a 7th-round pick or undrafted free agent signing. A team may see him as a practice squad or third quarterback and try to develop him through mini-camps and training camp. His draft stock will move based on how he performs at various pro days. If he impresses, he could see his name come off the board in the 6th round.

Mark Schofield knows how to throw on Cover 2 and against Cover 6, the free release, play action, and spectacular plays.

Video Courtesy of DraftBreakdown.com. Raw footage cut by Bryan Perez (@FirstRoundGrade) and Magnus Bendixen (@BendixenNFL). Give those guys a follow on Twitter.