Iowa OT Brandon Scherff ‒ he of the legendary 480-pound hang clean lift ‒ enters the 2015 NFL Draft as the number one offensive lineman on the board according to most mainstream experts. But while the noted strongman may be a certain first round selection, questions remain on whether Scherff can stick at tackle or if a shift to guard will be in his future.

The All-American redshirt senior finished his Hawkeyes career in grand fashion, earning both the Rimington-Pace Award ‒ a recognition of the best offensive lineman in the Big Ten ‒ and the Outland Trophy, an honor bestowed upon the top overall offensive lineman in college football as voted by the Football Writers Association of America.

Scherff ‒ a unique athlete who quarterbacked his high school football team at a reported 290 pounds while playing basketball, baseball, tennis as well as track and field ‒ started 36 games for Iowa with all but three at left tackle. After missing the second half of his redshirt sophomore season because of a broken right fibula and dislocated ankle, Scherff did not miss a game in his final two years at Iowa. He even managed to play four days after having his knee scoped to repair a meniscus injury this past season.

Possessing tremendous power, promising technique and a mean-streak, Scherff is the latest in a long line of road-grading offensive linemen to thrive under the tutelage of Iowa head coach Kirk Ferentz – a former offensive line guru for the Cleveland Browns and Baltimore Ravens during the 1990s. A real-life Paul Bunyan in football pads, Scherff gained additional notoriety after a viral video surfaced of the offensive lineman executing three hang clean reps at 443 pounds. Scherff has since claimed a personal best of 480 pounds. 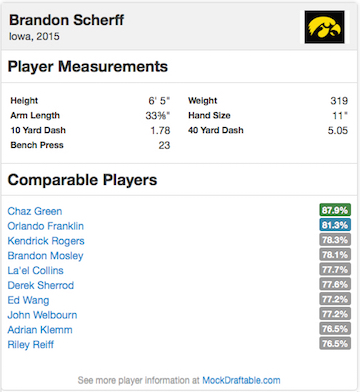 Listed at 6 foot 5 and weighing in at 319 pounds at the Combine, the 23-year-old Scherff cut his drills short after a minor injury to his right hamstring. Before exiting, the offensive lineman recorded an impressive 40-time of 5.05 seconds, placing him fourth among his position group.

However, the weight room star managed a surprisingly average 23 bench press reps of 225 pounds ‒ a tally that landed him 24th among 37 offensive linemen that participated. If healthy enough to perform, Scherff will have one last showing for pro scouts before the draft at Iowa’s Pro Day on March 23.

Combining impressive power, short-area quickness and sound technique, Scherff shines brightest as a run blocker. Whether mauling defenders at the point of attack or using solid footwork and upper-body strength to gain leverage on difficult blocks, the offensive lineman has the skill set to succeed in either a zone- or man-blocking scheme in the NFL.

Transferring his weight room exploits to the football field, Scherff displays brute strength in the run game. Capable of staggering defenders with a jolt at first contact, the lineman remains fundamentally sound when fitting into his blocks:

The left tackle consistently checks off all the boxes as a run blocker at the point of attack: quick first step, nimble feet, tight hands and elbows, proper aiming points and use of a strong base that smoothly rolls hips into the fit of the block. In the plays shown above, Scherff uses good footwork in concert with excellent hand placement to turn and wall off defenders from the running back.

Scherff’s ability to almost effortlessly execute reach and cut-off blocks would make him an immediate asset to a zone-blocking run scheme.

The offensive lineman also possesses a “play past the whistle” mentality that can make the difference in gaining those precious extra inches:

In the clip above, Scherff fires out quickly and buries his hands inside the chest of the defender, knocking him backward. Controlling the block, Scherff squares his hips and drives forward, flattening his back with bend in the knees, and churning his legs hard to finish off the defender.

Exhibiting good mobility with few wasted steps, Scherff also excels in space, such as on the pull block below:

Scherff uses his lateral agility to quickly pull around the tight end and kick out the alley defender at the second level, securing room to the outside for his running back. Although the Hawkeyes used Scherff mostly on front-side pulls, the lineman demonstrates the necessary short-area speed to be an effective trap blocker from the backside – which, if moved to guard, makes him an attractive option for power-blocking schemes.

The lineman’s short-area quickness also allows him to be a productive blocker on screen plays:

Selling the fake, the left tackle fires out past the line of scrimmage to simulate a run play before flaring out to the flat to cut down the defensive back.

But while the left tackle flashes proficient east-west mobility, Scherff truly stands out when working upfield on second-level blocks:

Such as in the plays above, Scherff hits the second level with authority, packing a heavy punch and superior leg drive to manhandle lighter defenders to the ground or toward the sideline.

In pass protection, Scherff recognizes and adeptly handles most stunts and blitzes, displaying quick reflexes and a high football IQ:

By staying square to the line of scrimmage for as long as possible, Scherff preserves his vision of the whole field where he can more easily read and react to slants, loops and blitzes thrown his way.

And would-be blitzers better be on high alert when heading in Scherff’s direction as seen below on this de-cleating block:

In all the plays shown above, the lineman stays light on his feet, shuffling well while also exhibiting discipline within his gap responsibility, passing off slanting defenders and quickly rotating back to pick up additional threats. As a professional – whether at guard or tackle – Scherff will face a steady diet of pressure schemes on obvious passing downs aimed at pulling the blocker out of position. However, the lineman seems poised for the challenge based on the film reviewed.

The main area of concern – and the most prominent reason a move to guard may be in order for Scherff – are his overall struggles in pass protection, particularly on speed bull rushes and change-of-direction power moves.

Too reliant on his upper body and initial punch/push, Scherff gets himself in trouble looking for knockout blows instead of controlling the block through proper technique:

In the clips above, Scherff fails to get himself set quickly, exposing his chest to the defender and engaging with locked knees, preventing him from using his base to thwart momentum into the backfield.

When bringing his arms up to the ready position, Scherff has a tendency to widen out and lose inside leverage. By not maintaining tight hands/elbows and delivering a strong punch inside, the lineman instead often lands his mitts high and on the outside shoulders of the defender where he can no longer control the block.

In addition, Scherff exhibits poor technique when trying to recover from the initial thrust of a successful bull rush. Linemen often try to reset by taking a short hop backwards to re-establish lower body leverage in an attempt to suppress a defender’s push into the pocket. However, Scherff struggles to drop his hips and regain bend in his knees, sapping power from his base as a result.

When Scherff goes through a difficult stretch dealing with quality bull rushers, he tends to start over-setting, leaving himself susceptible to inside moves:

In the plays above, Scherff is either caught over-setting his kick-slide in anticipation of power/speed rushes toward the outside or lunging forward to initiate contact and becoming top-heavy in the process. Both actions leave a left tackle vulnerable to counters – swim moves in the cutups shown – back toward the inside.

As a guard, Scherff would face fewer two-way go pass rush attempts along the interior and would also have help to either side.

Explosive off the snap as a run blocker, Scherff’s quickness – and hastiness – can occasionally cause the lineman to cut combination blocks too short and misfire on targets at the second level:

When working a combo block, securing the defender on the line of scrimmage remains first priority. If moved to guard, Scherff will often be responsible for securing the nose or under tackle before peeling off to block a linebacker. The lineman also has a proclivity for committing early after bursting into the second level, lowering his helmet and taking his eyes off a moving target – allowing shiftier defenders to sidestep and “olé” the bruising blocker.

Despite areas of concern in pass protection, Scherff is a premier prospect in the upcoming 2015 NFL Draft and remains a solid bet to be the first offensive lineman taken off the board – though, not necessarily the best tackle. While athletic and powerful enough to overcome most lapses in pass protection technique against collegiate defenders, he will need to revamp his footwork, break bad habits in hand placement, and learn to use his lower body more efficiently before he can develop into an elite NFL left or right tackle. However, if kicked inside to guard where some of his liabilities in pass protection can be greatly minimized, Scherff’s tenacity and advanced technique in the run game make him an immediate candidate to start and flourish within any blocking scheme.