Director of the Scouting Academy and ITP contributor Dan Hatman has written ten short pieces using Matt Miller’s tweet list as inspiration, hoping to illuminate readers on aspects of the scouting and player evaluation business that are misunderstood, glossed over, or ignored. This is Part 4, Traits Not Scheme.

Production must be the result of traits – not a result of scheme or competition.

In 1999, June Jones took over as head coach at the University of Hawaii, running an offensive system, labelled the ‘Run and Shoot’. Under his tutelage, QBs Timmy Chang and Colt Brennan put up historic collegiate careers. Brennan finished 3rd in the Heisman voting in 2007 and Chang held the all-time NCAA career passing yards record (17,072) from 2004 until 2011.

Looking just at their mind-boggling numbers, you might think Chang and Brennan would be easy 1st round picks, if not #1 overall. Chang was an undrafted free agent with the Arizona Cardinals, bounced to NFL Europe, to the CFL and, ultimately into coaching. Brennan was selected in the 6th round of the 2008 Draft by Washington, barely clinging on the backend of their roster for two seasons, before being released having thrown zero passes in a regular season game.

For another example look at Missouri Defensive Line Coach Craig ‘Kool’ Kuligowski (@LetsMeetAtTheQB), who has coached 9 players to All-Conference honors. Coach ‘Kool’ outlines his philosophies here, but in summary, he instructs his players to focus on stopping the pass on every snap, only stopping the run on the way to the QB. His players consistently put up huge numbers of tackles for loss and sacks, and in 2013 his system produced the SEC Defensive Player of the Year and a unanimous All-American, Michael Sam, who led the SEC with 18 tackles for loss, including 10 sacks.

With more than 95% of Power 5 conference Defensive Players of the Year are first day selections (many top 10 selections), you immediately think of someone who should be under consideration for a 1st round pick. However, Sam was a product of the Coach Kool system, lacking the ideal athleticism and traits of an NFL defensive end, and unable to 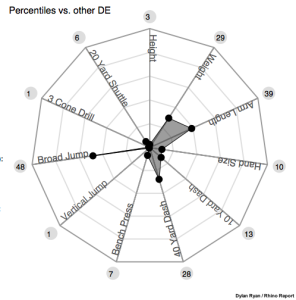 stick at the NFL level.

Players need to produce on the field. That is what we are all looking for, but when it comes to evaluating a player’s ability to perform for your team, we do need to understand some context. The main question you are looking to answer is simple; Did the scheme or level of competition the player faced positively impact his performance past what his traits would indicate?

As we project a player from one level to another or from one team to another, the only constant is their traits:  a quarterback’s accuracy and arm strength are the same ‒ whether those skills fit the team/scheme requirements is just as important, but the traits are what that player can do. Whether he can fit the scheme is a secondary part of the process. We must understand and evaluate each and every trait in order to understand WHY the player is successful, and why they could be successful for our team.