Football is littered with specialized terminology. From crack sweep to 6 technique, commentators rarely get to explain everything you need to know before the next play. Inside The Pylon’s glossary was developed to give fans a deeper understanding of the game through clear explanations, as well as image and video examples. Please contact us with any terms or phrases you’d like to know more about.

00 personnel is an offensive personnel package where the five eligible receivers consist of 0 running backs, 0 tight ends, and 5 wide receivers. This personnel group is primarily used in long-yardage situations where the offense needs to spread out the defense and get downfield quickly, giving the offense its five fastest receivers to create mismatches with the opposing secondary.

Below is a screenshot of the Green Bay Packers using 00 offensive personnel: 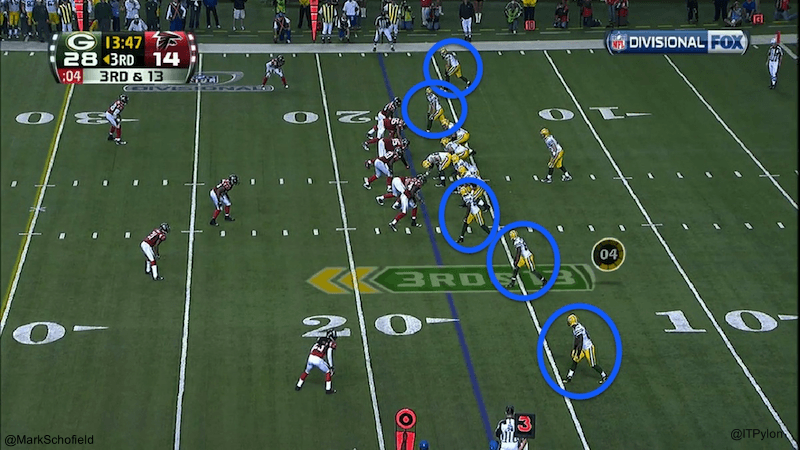 The 00 offensive personnel package, with its emphasis on the passing game, forces defenses to substitute in their nickel and/or dime packages, removing down linemen and/or linebackers for extra defensive backs.

In this game from 2014, the San Francisco 49ers employed a number of 00 offensive personnel formations against the Arizona Cardinals. Here, they line up with quarterback Colin Kaepernick (#7) alone in the backfield and in a shotgun, with five wide receivers. The offense has two receivers to the left in an inverted slot formation, with three receivers to the right in a trips: The Cardinals have a sub package on the field with three down linemen, one linebacker, and seven defensive backs. They set up with a single high safety and show Cover 1.

The 49ers employ a mirrored passing concept here, running a smash combination to each side of the field, with the outside receivers running quick hitch routes while the inside receivers run the deeper corner routes. Finally Stevie Johnson (#13), the inside trips receiver, runs an option route over the middle: Johnson is matched up against cornerback Antonio Cromartie (#31). As the WR reaches the top of his stem, he sees the man coverage and that the CB has outside leverage, so he crosses over the middle:

Here is another look at Johnson’s route. Notice how he flashes his field of vision to the inside, sees the coverage develop, then cuts over the middle: