Chuck Zodda enjoys candlelit return blocks, long runbacks on punts, and the sweet smell of gunners making tackles. When not busy romanticizing the virtues of punters as multi-talented players, he spends his time on the oft-overlooked aspects of special teams.

Kickoff coverage units seem relatively straightforward to build: Find 10 men with little regard for their own physical safety. Line them up next to a kicker. Tell them to run as fast as possible for 60 to 80 yards, hitting everything in their way. Seek and destroy the ball-carrier. Repeat as often as necessary.

The basics of kickoff coverage are understandable to anyone watching an NFL game for the first time. But kickoffs only seem simple. In reality, good kickoff coverage is a symphony of parts working together to build a return-stopping unit.

One of the critical strategies used is that of the safety. Typically one of the players lined up close to the sideline, “safeties” on the kickoff unit ‒ which are not the same as safeties on defense ‒ help to prevent a breakdown in coverage. Rather than flying down the field with the rest of the coverage unit, they often trail five to seven yards behind the primary wave of defenders, tasked with making sure a mistake up front doesn’t turn into a touchdown.

Setup Before the Kick

NFL rules mandate the kicking team have at least four players on each side of the kicker when the ball is struck. This prevents overloaded formations and results in the setup that most fans recognize: 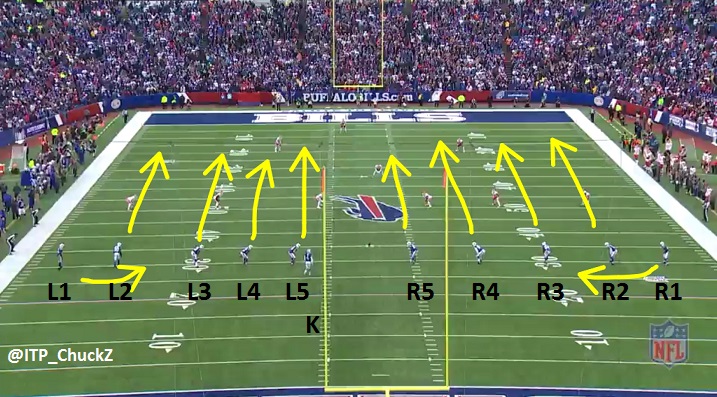 The Buffalo Bills align with 10 men within five yards of the line of scrimmage. Prior to 2011, teams had been allowed to line up 10 yards behind the line, but this was reduced in order to limit the momentum of players in an attempt to reduce injuries on kickoffs. The Bills set up in what is known as 5×5 formation, with five men on each side of the kicker. The players are numbered in increasing order from the outside-in: players nearest the sideline are the L1 and R1, and players closest to midfield are the L5 and R5, respectively.

In general, there are two strategies employed by NFL kickoff teams for safety coverage – Cover 1 and Cover 2. These terms have no relation to the schemes used by pass defenses, but rather indicate which position is the safety on a given play. In Cover 1, the L1 and R1 draw the safety assignment, while in Cover 2, the L2 and R2 have safety responsibility.

The Bills primarily use Cover 1. As shown above, the eight interior defenders are tasked with rushing downfield to tackle the returner, while the L1 and R1 trail behind as the last line of defense.

Sprint and Smack Someone

Once the ball is kicked, the key for the coverage group is staying equally spaced. They aim to prevent the return team from sealing off a running lane. The Bills show great spacing on this play, remaining in their lanes as they reach midfield: 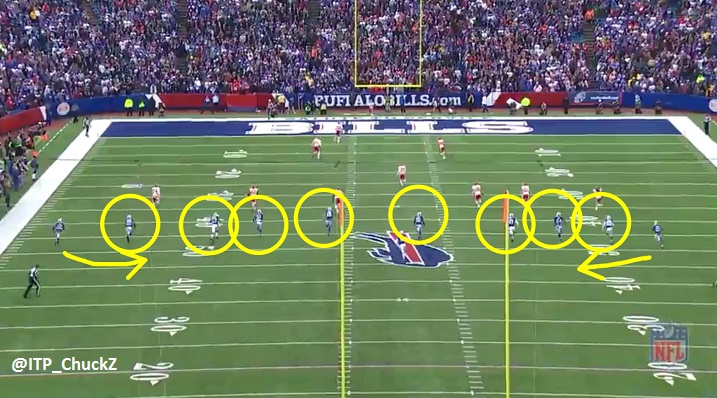 The eight central defenders, circled in yellow, show no major holes at this point, with nearly equal spacing. The Chiefs are retreating toward their own goal line, and have yet to make a move to force the Bills to the left or right.

As the play continues, the Kansas City blocking begins to take shape: 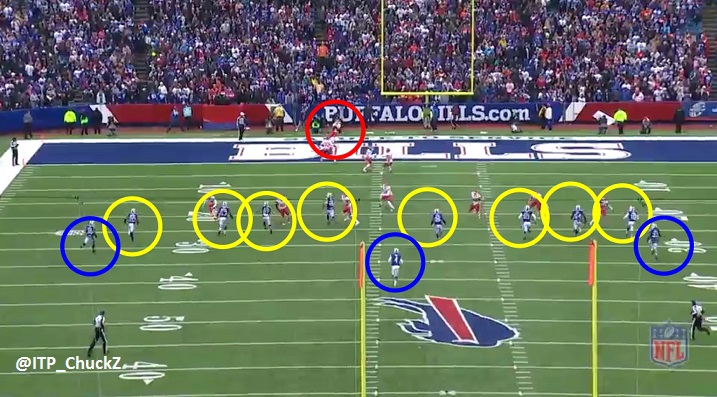 Kansas City returner De’Anthony Thomas, circled in red, has caught the ball eight yards deep in his end zone and begins to move upfield. Several Chiefs are setting up to block the Bills’ L4 and L5 to the left as they reach the 25-yard line, but Buffalo is still largely in good position and there are no major gaps between defenders. The L1 and R1, circled in blue, at far left and right, are folding behind the L2 and R2 as they peel off to form a second layer of defense. The final member of the coverage team is the kicker, central blue circle, who is disregarded by most analysts as incapable of making a tackle.

Thomas is out of the end zone, just inside the left hash: 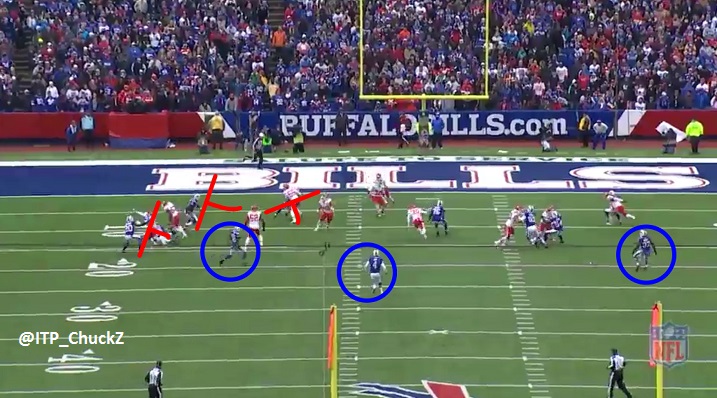 The blockers to the left are focused on sealing off Buffalo defenders. It is here that the typically strong Bills coverage team (third-best in the NFL, allowing 20.0 yards per return) breaks down. With L2 through L5 sealed off by blocks from the Kansas City return team, no Buffalo player can squeeze down on Thomas.

But the real issue is the play of the two safeties. While the R1 and kicker are in the proper position, the L1 has pinched down too far ‒ unable to contain the play from bouncing to the outside. Much like an edge player trying to force a cutback, a safety on kickoff coverage must funnel the ball back to the inside and must not allow the return man to get to the sideline and empty space.

Thomas makes a beeline for the lane immediately: 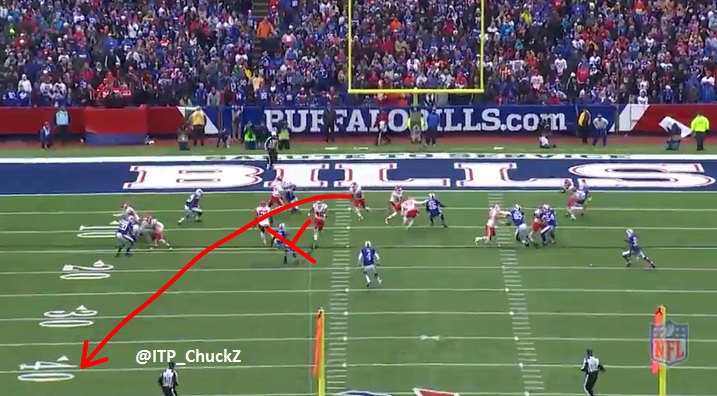 A Kansas City blocker engages the Bills L1, completely cutting off the rest of the Buffalo left side from the play ‒ either pushing them behind the speedy Thomas toward the goal line, or sealing them off to the outside of the field. This presents the exact situation needed for the kickoff coverage safeties to do their job, but the L1 is out of position.

Thomas hits the hole quickly and gets to the outside, with just about everyone left in his wake: 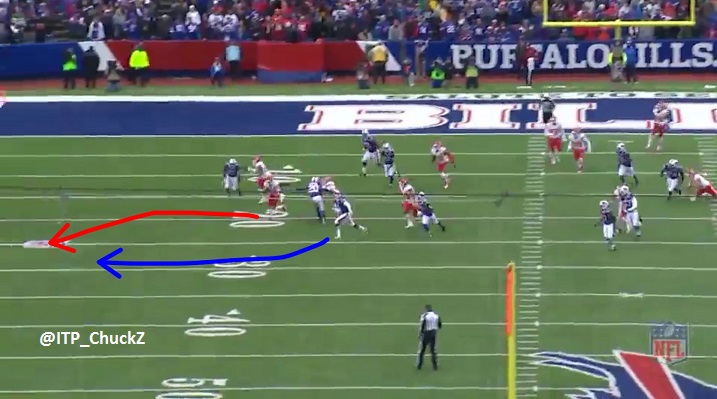 The only player in position to make the tackle on the speedy Thomas is kickoff specialist Jordan Gay. Despite never being timed in the 40-yard dash because of the natural disability of being a kicker, Gay takes an outstanding angle to cut off Thomas, once clocked at 4.34 seconds in the 40 while at Oregon. Yes, following in the footsteps of visionaries such as Pat McAfee, who helped bring kicker tackling into the spotlight, Gay chooses to ignore the advice Jenny gave Forrest to “just run away” and instead runs toward the battle. The result is astonishing: 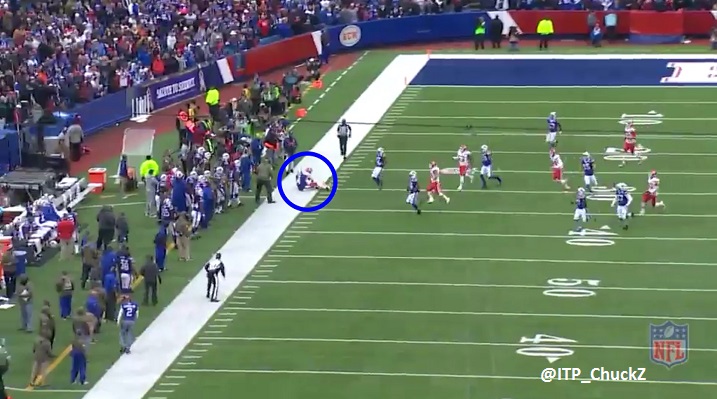 Thomas is pulverized by Gay, who drags him to the ground at the 30-yard line after a 38-yard return. As he hit the ground, the artificial turf in Buffalo reverberated with the sound of thunder. It was assumed that the “real football players” would be able to handle kickoff coverage. The result was a kicker coming in to mop up. Jordan Gay? More like Mr. Clean.

What does a play look like where the safety executes correctly? Week 9 saw the Philadelphia Eagles travel to Houston to face the Texans. On the opening kickoff, Houston lined up to kick deep: 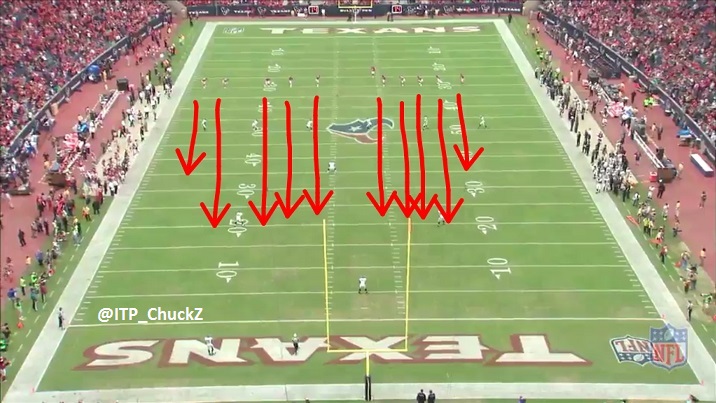 The Texans set up in standard 5×5 formation. Kicker Randy Bullock lacks a strong leg, with only 47% of his kicks going for touchbacks this season, below the NFL mark of 52.3%.

Houston employs one wrinkle, shifting their alignment of the coverage team to the right. The R1 (at far left in the image) is nearly on the sideline, while the L1 (at far right in the image) is set up just outside the left numbers. With the ball on the right hash, this indicates a kick deep to the right side of the field. Like Buffalo in the prior example, Houston uses Kick Cover 1, with the L1 and R1 dropping behind the initial line of defenders to act as safeties.

As the Texans reach the 30-yard line, they pinch further to the right: 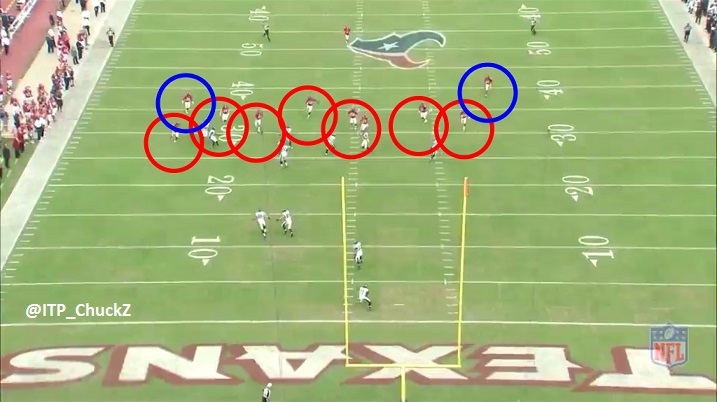 Eight primary defenders, circled in red, are between the right sideline and the left hash as Eagles returner Josh Huff catches the ball. Circled in blue are the L1 and R1, both seven yards behind the initial wave. This provides good depth from which to read and react to the play in front of them. The R1 aligns vertically with the R2, as the play is hemmed in to this side of the field, but the L1 remains several yards outside the L2 to keep leverage on this side of the field.

As the play continues, Huff sees the wall of red jerseys and tries to bounce to the weak side with a quick cut: 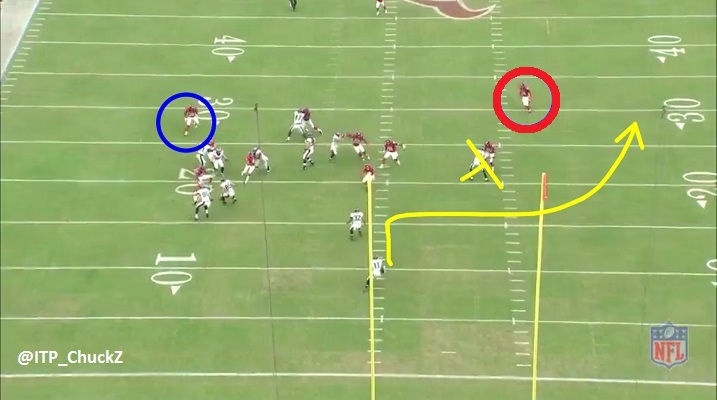 Our focus now turns to A.J. Bouye, the L1 on the kickoff. Note the absence of any Texans outside the hash mark except Bouye who is  circled in red. Huff has boatloads of space, and could be off to the races. Bouye, rather than being sucked in by the initial upfield movement from Huff, stays true to his responsibility: 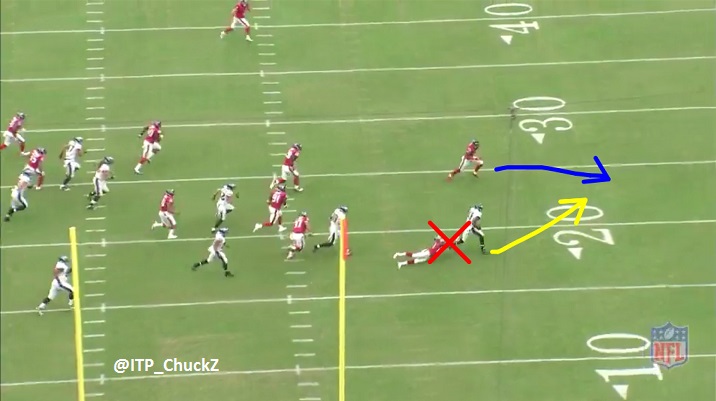 Bouye breaks to the outside with Huff, and has a step on the speedster in a race to the edge. The returner eludes a tackle by the L2, who was out of position due to a block, with only Bouye to beat.

The safety is up to the task. He breaks to the outside, knowing if he forces Huff to cut back, there are several defenders behind him who can make the tackle. His main objective here is to either force that move, or make the tackle himself: 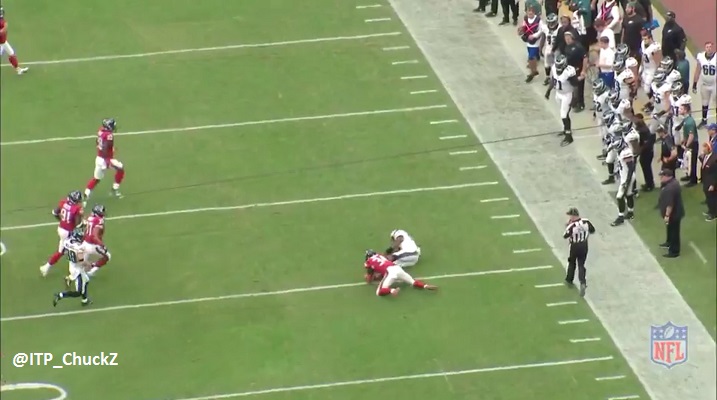 Bouye wraps up Huff at the 25-yard line, limiting him to a 24-yard runback. Whereas the first play detailed ended up going for a 38-yard return, Bouye was able to limit the damage because of his sound fundamentals and focus on doing his job. This is not a flashy play or one most fans would notice, but Bouye likely saved 10-15 yards, if not more.

Safety play on kickoffs is incredibly important in the field position game. Proper safety play in this case would have resulted in a significantly shorter return, affecting a defense’s ability to bring pressure and scheme for field position. And while Gay’s tackle exemplifies the new breed of athletic kickers, it’s important to remember that a specialist isn’t necessarily paid to keep points off the board. That remains the job of the kickoff coverage unit, with safeties an integral part of the scheme.