Few things swing momentum as much as a preventing a touchdown and, as Dave Archibald points out, Washington’s goal line stand was the key play in their victory over the Tampa Bay Buccaneers.

Things looked bleak for Washington late in Sunday’s contest with Tampa Bay. The gridiron club from the nation’s capital had trailed 24-0, but battled back to within three points before Bucs running back Doug Martin ripped off a 49-yard run to give Tampa Bay a first-and-goal on the 5-yard line. With just four minutes left, Washington could not afford to allow a touchdown and go down by two scores. And so the defense stiffened up, stopping Martin short of the goal line twice and forcing 3rd-and-goal from the 1-yard-line.

The Buccaneers line up in a jumbo goal line package with three tight ends and two backs. They run outside zone left, with second-year back Charles Sims (#34) carrying the rock behind fullback Jorvorskie Lane (#46) and a combination block attempted by left tackle Donovan Smith (#76) and extra tackle Kevin Pamphile (#64) lined up as a tight end:

Defensive end Jason Hatcher (#97), lined up across from Pamphile at the snap, holds the key to the play.

The Buccaneers initially block him with both Smith and Pamphile, the idea being that once Smith reaches Hatcher, Pamphile can slide up to the next level and block safety Dashon Goldson (#38). Hatcher, however, fights to the play side and prevents Pamphile from releasing and walling off Goldson. Meanwhile, outside linebacker Mason Foster (#54) meets Lane in the backfield. Once Goldson squeezes past Pamphile, he has a clear path to Sims.

Away from the point of attack, the Buccaneers attempt to seal off the backside pursuit by using cut blocks, diving at the defensive linemen’s legs to trip and delay them. For the most part this works, but veteran defensive tackle Chris Baker (#92) eludes the cut block of right tackle Gosder Cherilus (#78) and charges into the backfield. With both Baker and Goldson unblocked, Sims is dead-to-rights, and the pair of defenders haul him down for a two-yard loss.

Having failed to punch the ball in, Tampa Bay settled for a field goal and Washington marched back down the field and scored a touchdown to win 31-30.

This game map, courtesy of theQ5.com, shows the topsy-turvy nature of the game, with Tampa Bay dominating early, and Washington charging back with a terrific second-half offensive performance. 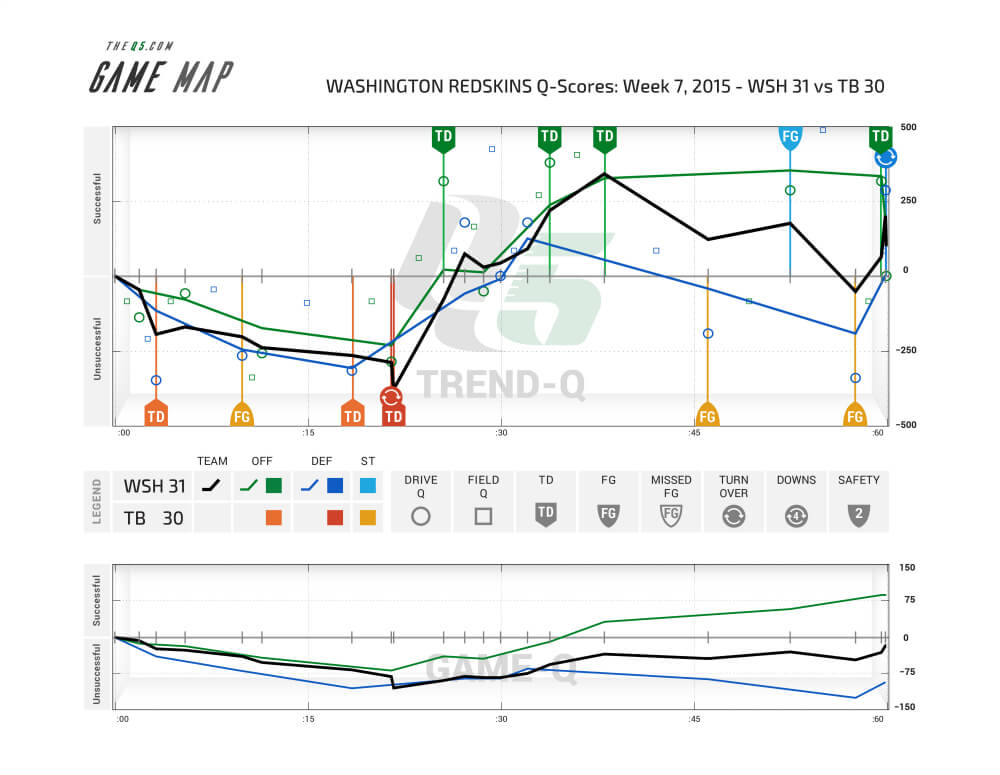 The Washington defense was not as sharp as their offense – even in the second half – but when the chips were down, they found a way to make a key goal-line stand and give the offense the chance to win the game.