The team that wins the turnover battle usually wins the game, and it’s no mystery why: whether a fumble that stakes an underdog to a lead, a giveaway that shifts momentum, or a game-saving pick, few plays make more of a difference in winning and losing. Dave Archibald looks at Robert Alford’s overtime pick six that gave the Atlanta Falcons a 25-19 victory against Washington.

The Falcons were flying high entering Sunday, boasting a 4-0 record and coming off decisive victories against the Dallas Cowboys and Houston Texans. They were heavy favorites against a 2-2 Washington team, but a sloppy, tough, low-scoring affair had them trailing into the fourth quarter. That wild period featured three lead changes and a 52-yard Dustin Hopkins field goal as time expired, pulling Washington even and sending the game to overtime. Regulation had four total turnovers between the teams, but it was the fifth turnover, in overtime, that decided the contest: 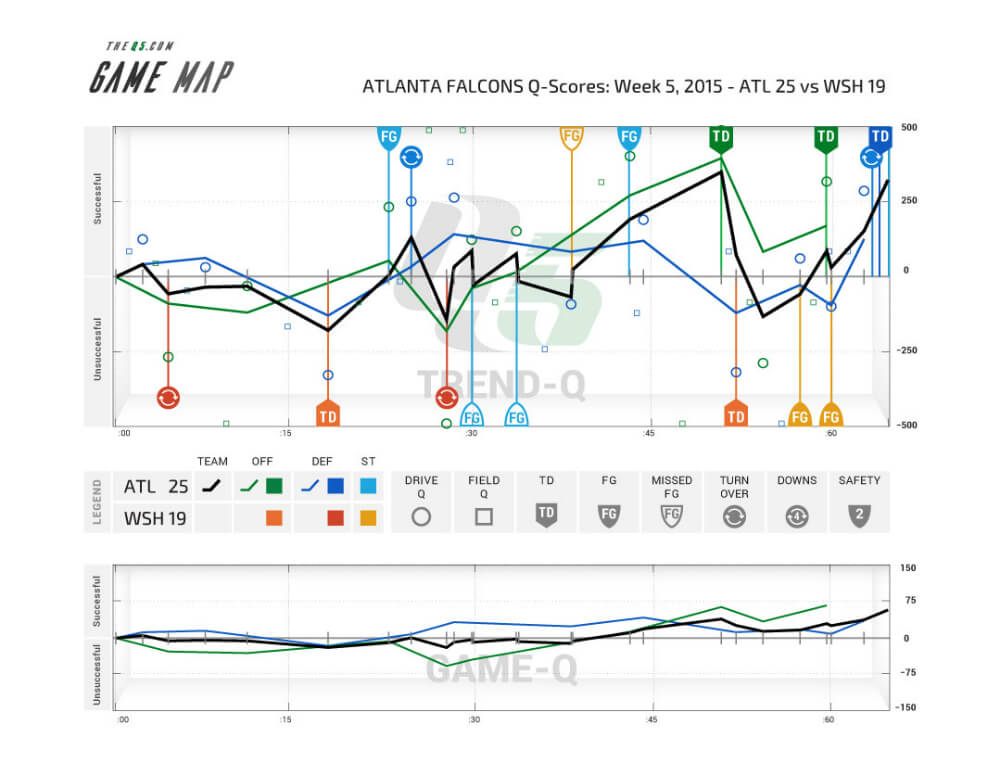 The Game Map paints the picture of this topsy-turvy contest, with both defenses carrying the day early while the offenses came on late. Washington quarterback Kirk Cousins completed just 11 of 21 passes for 105 yards through three quarters, but was lights-out thereafter, completing 10 passes in a row between the fourth quarter and overtime. On Washington’s first possession of overtime, he drove his team to midfield, in great position to take a lead or win the game, but there things went awry:

Washington lines up in an empty set with trips right and two receivers left. The Falcons counter with four down linemen and linebacker Nathan Stupar (#54) standing up to the offensive left side of the line of scrimmage. Since Washington is showing an obvious pass look and Atlanta doesn’t have to worry about the run, the Falcons send a blitz. Rookie pass rusher Vic Beasley (#44) loops from the end to the middle. Adrian Clayborn (#99), lined up as a defensive tackle, veers not toward the quarterback, but toward Washington left tackle Trent Williams (#71), tying him up. That frees Stupar to rush off the left side untouched. With pressure in his face, Cousins uncorks a throw to the left side:

The end zone view sheds light on what happens once the ball is in the air. Cornerback Robert Alford (#23) lines up close to the line of scrimmage on wideout Ryan Grant (#14), presenting a press man look. Just before the snap, he shuffles his feet, facing nearly perpendicular to the line of scrimmage and looking at Cousins, in a zone technique. Because he is watching the quarterback, Alford sees the throw, flips his hips, and drives toward the ball before Grant even begins his cut. The receiver, perhaps desperate to catch up to Alford, slips and falls making his break, leaving him unable to make the tackle when the cornerback has to tiptoe along the sideline to keep from the going out-of-bounds. His balance recovered, Alford has only to sprint to the end zone for the game-winning touchdown.

Turnovers often play a big role in wins and losses, and it doesn’t get any bigger than an interception returned for the decisive score in overtime. The Falcons are sitting pretty now with a 5-0 record, while Washington drops to 2-3 in a season full of frustrating defeats. With road games remaining against the Jets, Patriots, Panthers, and Eagles, things don’t figure to look up for Washington anytime soon; meanwhile, the Falcons don’t play a team with a winning record until Week 14. Alford’s interception tells the story of the 2015 season for both teams: another heartbreaking mistake for Washington, and another exultant triumph for the high-flying Falcons.